The prime minister visited the research centre, marking the government’s plans for a new fast-track visa route for the best scientists to continue to move to the UK after Brexit 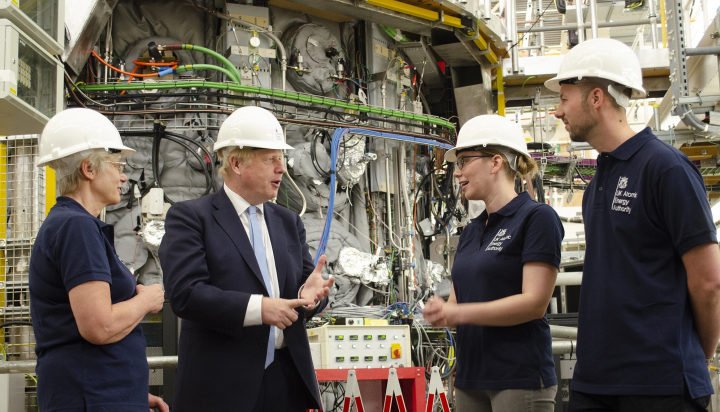 Prime Minister Boris Johnson visited the “world leading” research centre at Culham in Oxfordshire which is aiming to harness the huge potential of nuclear fusion as a low carbon energy source.

It marks the government’s plans to develop a new fast-track visa route for the best and brightest scientists to continue to move to the UK after Brexit.

During the visit, Mr Johnson was shown the new MAST Upgrade fusion experiment, which is researching a compact design for future fusion power stations, as well as the Materials Research Facility to see its research into materials for nuclear reactors.

Researchers at Culham are developing a type of fusion reactor known as a ‘tokamak’ – a magnetic chamber in which plasma is heated and controlled.

The research is focused on preparing for the international tokamak experiment (ITER), being built in southern France.

Due to start up in 2025, ITER is designed to show that fusion can work on the scale of a power plant and if successful, should lead to electricity from fusion being on the grid by 2050.

The UK Atomic Energy Authority believes nuclear fusion has huge potential as a long term energy source that is “environmentally responsible and inherently safe, with abundant and widespread fuel resources”.

Mr Johnson said: “It was fantastic to visit Culham Science Centre today and meet the met and women who are helping to invent a sustainable fusion reactor.

“The UK is leading the world in this sector, thanks in significant part to the work of the UK Atomic Energy Authority. I’m confident that with the help of the immigration reforms I have announced today, we will continue to do so for many years to come.”