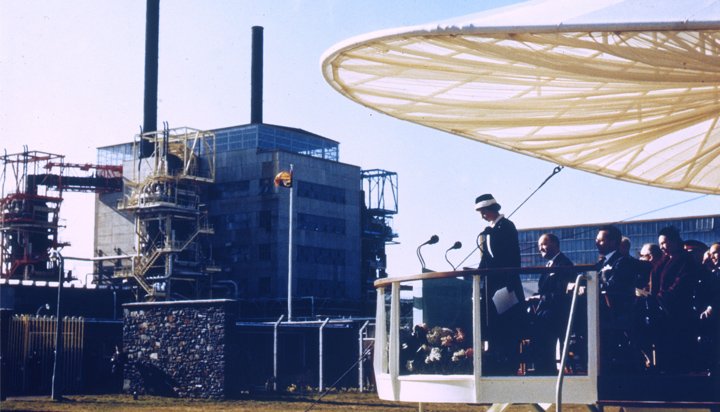 The decommissioning work at Sellafield has passed a major milestone with the completion of the defuelling operations at Calder Hall.

That means the world’s first industrial-scale nuclear power station to be connected to the national grid is empty of fuel for the first time since the 1950s.

The power station was opened by the Queen in 1956 and first electricity was sent to the town of Workington in Cumbria.

Calder Hall’s Magnox design was the template for Britain’s first generation of nuclear power stations and the technology was exported around the world.

It provided electricity for 47 years, before stopping generation in 2003, with defuelling starting in 2011.

A total of 38,953 spent fuel rods were carefully retrieved from the power station’s four reactors, with the fuel transferred in shielded flasks to Sellafield’s Fuel Handling Plant.

Stuart Latham, Head of Remediation for Sellafield Ltd said: “This is a truly iconic moment. Calder Hall was the birthplace of the civil nuclear industry. It inspired the world and put our site at the forefront of the atomic age. Completing the defuelling programme is an important moment for Sellafield.”

Calder Hall’s reactor buildings will now be placed into a state known as “care and maintenance” and they will be fully decommissioning and demolished in due course.