Around 60 people are now believed to be dead or missing after a freight train carrying crude oil exploded in Quebec, Canada. The unmanned Montreal, Maine & Atlantic Railway (MMA) […] 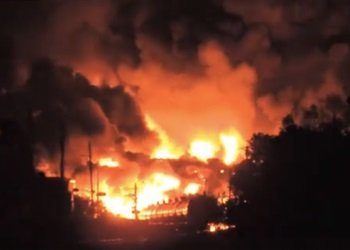 Around 60 people are now believed to be dead or missing after a freight train carrying crude oil exploded in Quebec, Canada.

The unmanned Montreal, Maine & Atlantic Railway (MMA) train derailed and blew up in the middle of the town of Lac-Megantic near the Maine border early Saturday morning.

It was carrying 72 carloads of crude oil and was parked shortly before midnight on Friday. Reports claim the railway owner said the brakes were applied at the time but later either failed or were released causing the train to coast downhill and derail in the town centre, exploding and destroying dozens of buildings. A total of 13 people have been confirmed dead, according to reports.

In a statement released on Sunday, MMA said: “While the governmental investigation of the accident’s cause has largely prevented MMA from completing its own investigation, one fact that has emerged is the locomotive of the oil train parked at Nantes station was shut down subsequent to the departure of the engineer who had handled the train from Farnham, which may have resulted in the release of air brakes on the locomotive that was holding the train in place. We don’t have complete information concerning this incident but will co-operate with government authorities as they continue their investigation.”

Reports suggest authorities have now launched a criminal investigation into what happened but have ruled out terrorism.

Edward A. Burkhardt, 74, CEO of Rail World Inc. which owns MMA told a news outlet: “Overall our operation, I think, is entirely consistent with industry standards and our safety records are pretty good and it has been improved over a period of time. I want to make clear that I’m not blaming the fire department… The fire department I think acted reasonably. I think they certainly were not aware of the consequences of what they were doing. I’d like to know what caused it.”