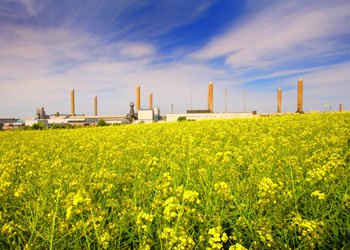 Mining firm Rio Tinto is planning to close its Lynemouth aluminium smelter because of rising energy costs. Announcing the news the Rio Tinto Alcan boss pointed to upcoming carbon legislation as key factor behind the closure of the smelting factory in Northumberland which employs 515 people.

The final decision waits on a 90-day consultation period with workers’ unions. Employees affected by the cut will be offered re-training and help with looking for their next jobs.

Jacynthe Côté, chief executive of Rio Tinto Alcan said: “This decision follows a thorough strategic review which explored every possible option for continuing to operate the smelter and power station. However, it is clear the smelter is no longer a sustainable business because its energy costs are increasing significantly, due largely to emerging legislation.”

A spokesman confirmed that the potential impact of the carbon floor price, which kicks in by 2013, was partly to blame for the closure in light of already high operation costs.

The mining firm chief added hopes were high that the power station on the same site, which employs a further 111 people, can remain open under new ownership. Rio Tinto told ELN that talks with a third party about selling it were at “an advanced stage” but could not disclose any more information.

Dr Neil Bentley, CBI Deputy Director-General said: “This news shows why the Government must act to insulate manufacturers most at risk from the increasing cost of energy legislation. Energy intensive companies make the very products the UK needs to move to a low-carbon economy, and are already being hit by rising energy prices and slower demand. The CBI proposes targeting companies most at risk with an exemption from the carbon floor price.”