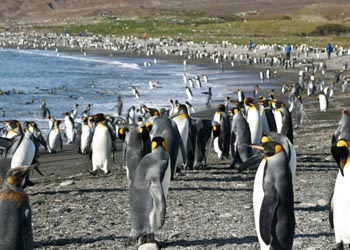 The UK Government has hit back after Argentina’s Foreign Minister threatened British oil exploration firms working in the Falklands with legal action.

Yesterday Argentina’s Foreign Minister Hector Timmerman reportedly said “the resources of the South Atlantic are the property of all the Argentines” and claimed oil development in the Falklands was “illegal”.

The comments follow a period of heightened tension between Argentina and the UK over who controls the islands.

The Foreign Office was adamant hydrocarbon exploration in the Falklands is “a legitimate commercial venture”.

It said the Falkland Islands Government has the right to develop resources in its own waters without “interference” from its mainland neighbour.

A spokesperson said: “From harassing Falklands shipping to threatening the Islanders’ air links with Chile, Argentina’s efforts to intimidate the Falklands are illegal, unbecoming and wholly counter-productive.

“We are studying Argentina’s remarks carefully and will work closely with any company potentially affected to ensure that the practical implications for them are as few as possible.”

Rockhopper Exploration, the UK oil firm which last year was the first in the world to strike lucky in the region appeared to brush off the Argentinian threat.

A spokesman said: “We’re not making any response. Rockhopper has never commented on political issues.”

Earlier this year the firm completed a “highly successful” test at 10 wells in the SeaLion field in the Falklands.

It has said it will cost $2billion (£1.3bn) to extract the oil commercially, with production scheduled to start in 2016.