A team of scientists from Belize have successfully harvested electricity from squid. The invertebrates have been discharging enough bioelectricity to run the lighting and air-conditioning units at the research centre on Glover’s […] 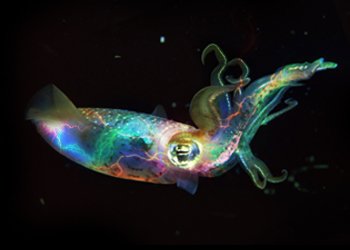 A team of scientists from Belize have successfully harvested electricity from squid. The invertebrates have been discharging enough bioelectricity to run the lighting and air-conditioning units at the research centre on Glover’s Reef Caye on the Caribbean coast.

The team lead by Dr Dino Vanidici have published their findings in the Journal of Invertebrate Science and believe it could herald a breakthrough in sustainable energy. The researchers used the Belize Rainbow Squid (pictured) which discharges an electric shock equivalent to 202V but has been known to produce up to 380V, they then collected the discharge onto a conductor placed in the pen and used it to charge a capacitor which was connected to a large set of batteries.

Dr Vanidici told ELN: “The squid are kept in pens in the sea and we have about 200 per pen. We have put a small underwater microphone in the sea that sends a signal at a certain frequency that makes the squid discharge their shock onto the conductor. It doesn’t harm the squid and they can keep discharging up to 30 times an hour on average they produce 5A of current.”

“It’s small scale but and we are producing on average 20kW of power per hour and that’s with considerable wastage in the converting process.  We’ve used it to power our research facilities and are now trialling the system for a few homes in the nearby village, we believe for small rural fishing communities across Belize and the wider Caribbean this could be a great source of sustainable energy.”

The Rainbow Squid is plentiful in the seas around Belize and has been found across the western Caribbean coastal waters of Mexico, Honduras and as far east as Cuba and the Caymans. If the trials in Belize are successful the project could be duplicated across the region.

Dr Vanidici insisted the squid were not being harmed by constantly discharging their electric shocks: “They use their shocks all the time in nature to navigate and capture prey and even to attract a mate, as they discharge they often change colour hence their name. Animal rights people can say it’s cruel but it’s just like a dog barking, the squid do this anyway all the time we are just harnessing mother nature’s gift. Besides they don’t taste good so they are not caught for food here and we have plenty of them that can be used by the fishermen as a source of income.”

But critics still say it’s a dubious practice. Sheila Granoche of the Belize Aquatic Large Lagoon Society  said there was a danger of exploitation: “The Rainbow Squid has its place in the ecosystem and if there is more and more harvesting of them for power it could upset the balance of the seas. I’m all for renewable power but we must not destroy the seas to get it.”