The Prime Minister has been criticised for his “weak position” on the UK’s energy mix by the Leader of the Green Party. Caroline Lucas MP has panned David Cameron’s remarks […] 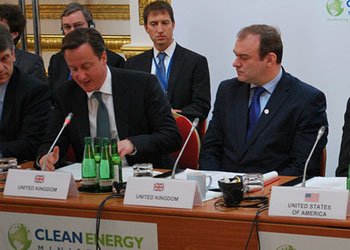 The Prime Minister has been criticised for his “weak position” on the UK’s energy mix by the Leader of the Green Party.

At the summit of at least 20 energy ministers from around the world, the Prime Minister said he “passionately believes rapid growth of renewables” is good for our future but with the emphasis on making it “financially sustainable”.

Writing an open letter to the Prime Minister, Ms Lucas said: “Your weak position on our long term energy mix is ill-informed, will be costly to householders in future and won’t put our country on track to exploit the employment opportunities of a truly thriving renewables industry.”

In the open letter in The Guardian, the Green Party leader goes on to ask for cuts to subsidies for nuclear power and fossil fuels, while suggesting the Prime Minister could “make a real difference” if he goes to the Earth summit in Rio in June.

The Prime Minister is said to be unable to attend the Rio+20 talks because of a diary clash with the Diamond Jubilee celebrations.