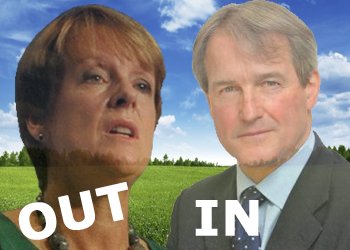 The former Northern Ireland Secretary and conservative MP  takes over from fellow Tory Caroline Spelman and will become responsible for a budget of more than £2billion at the Department of Environment, Farming and Rural Affairs.

He voted moderately for policies to stop climate change, according to the website Public Whip, although his selection could be a sticking point for environmentalists.

He has opposed wind turbines in his own constituency, apparently also wanting to scrap all energy subsidies and push on with using shale gas.

He has also reportedly signalled his support for a third runway at Heathrow, a U-turn from the Conservative’s 2010 manifesto which brought them into power with the Coalition.

Under his previous Cabinet role, the conservative was on hand for the momentous patching up of differences between the monarchy and Northern Ireland, being present at the handshake between the Queen and Martin McGuinness.

Earlier this year Mr Paterson caused controversy when he became the first member of the Cabinet to say publicly he does not support gay marriage.