Hayes: We should be “less apologetic” about gas

The new Energy Minister believes the UK needs to be “less apologetic” about using gas as part of its energy mix. At the opening of npower’s new gas-fired Pembroke Power […] 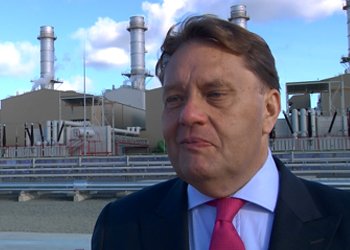 The new Energy Minister believes the UK needs to be “less apologetic” about using gas as part of its energy mix.

At the opening of npower’s new gas-fired Pembroke Power Station in Wales yesterday, John Hayes suggested there was no need to make excuses for a source of energy which will be powering millions of homes and businesses for some time.

Declaring the opening of the power station as “massively exciting”, Mr Hayes told ELN: “If we’re going to guarantee energy security that mix is going to include gas as well. We shouldn’t be apologetic about that.

He said the Government will be bringing out a Gas Strategy later this year as part of the Energy Bill. DECC says this is about providing certainty to investors to ensure sufficient investment comes forward, whilst also living within our legally binding carbon budgets.

Later in a speech to members of the community and npower staff, Mr Hayes suggested the Government’s “profound commitment to renewables” happily sits alongside gas which is a “reliable source of energy”.

The comments may provoke alarm among environmental campaigners who fear Britain is getting into a “dash for gas” but should reassure those such as Lord Browne who recently warned of an “unthinking abandonment” of fossil fuels.

Less than two weeks into the role since the Cabinet reshuffle, the Conservative MP admitted “I have a lot to learn” from the industry, but he also made clear the public’s interest must be looked after.

He added: “People must own this energy strategy if it’s to be delivered.”