The UK is now home to the world’s largest community-owned solar farm. Westmill Solar Co-operative confirmed the purchase of the £16.5 million solar farm located outside Shrivenham on the Oxfordshire […] 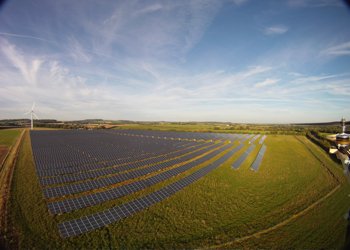 The UK is now home to the world’s largest community-owned solar farm.

Westmill Solar Co-operative confirmed the purchase of the £16.5 million solar farm located outside Shrivenham on the Oxfordshire Wiltshire border.

The company claims the 5MW farm can generate around 4,900 MWh of energy, equivalent to powering 1,500 homes and cutting more than 2,000 tonnes of carbon emissions.

Also claimed to be the UK’s first community-owned solar project, the farm which contains around 20,000 panels, attracted 1,650 investors and sold out in six weeks.

Philip Wolfe, Cooperative Chairman and solar industry expert: “Solar power will become the world’s greatest energy source in our lifetime; heralding a new era of sustainable and ‘democratic’ energy supply. As the success of Westmill shows, solar energy enables ordinary people to produce clean power, not only on their roof tops, but also at utility scale.”

The project has received support from more than 50% of Westmill members living within 40km of the project.