A protest up two chimneys of EDF Energy’s newest gas power station is continuing to rumble on after a spate of arrests at the site in Nottinghamshire yesterday evening. Half […] 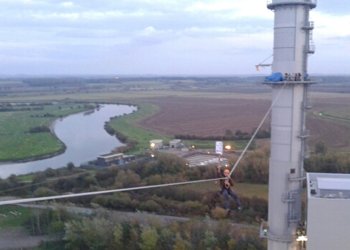 A protest up two chimneys of EDF Energy’s newest gas power station is continuing to rumble on after a spate of arrests at the site in Nottinghamshire yesterday evening.

Half of the 15 activists who have been occupying the 1,300MW West Burton plant intend to come down from the chimneys today, after ‘zipwiring’ from one chimney to another, leaving more supplies for the six who will remain.

The new gas plant which uses more efficient technology, known as combined cycle gas turbine (CCGT), has three units with one still finished and two others under construction.

The No Dash for Gas group which is co-ordinating the occupation said it had prevented 10,000 tonnes of CO2 emissions since EDF was forced to shut down on early Monday morning.

The campaign group suggested the devastation of Hurricane Sandy in the United States justified their action.

Ewa, one of the campaigners occupying the chimney said: “Hurricane Sandy is being directly linked to climate change, which is directly linked to the amount of fossil fuels, like gas, that we burn. Being up here in light of the damage we’re seeing from the hurricane feels like the most responsible thing we could be doing.”

She added: “When we did the maths this morning and realised what an environmental impact we’re making it suddenly hits home just how important radical action like this can be.”