The Government has announced it will let power companies charge consumers £7.6bn to pay for green power but has dithered on setting firm decarbonising targets. Ed Davey will this morning […] 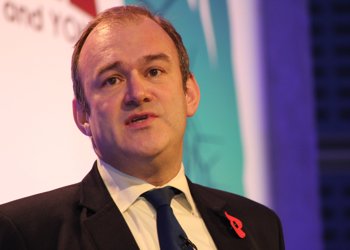 The Government has announced it will let power companies charge consumers £7.6bn to pay for green power but has dithered on setting firm decarbonising targets.

Ed Davey will this morning outline the details of how next Thursday’s energy bill will look.

The details of the Bill are to be finalised but in essence today’s announcement shows the coalition is trying to balance the increasingly unaffordable costs of renewable energy with its aspirations for a move to low carbon using gas as a bridge. In simple terms a fight between a Tory  Chancellor wanting to invest in gas to keep businesses costs down and a Lib Dem Energy Secretary wanting to push renewable investment.

Despite the clear fudge Ed Davey said today’s proposals would secure the thing so many in business have been asking for – a structure for investment in the electricity market – an investment the Government says will cost £110 bn.

The Energy and Climate Change Secretary said: “This is a durable agreement across the Coalition against which companies can invest and support jobs and our economic recovery. The decisions we’ve reached are true to the Coalition Agreement, they mean we can introduce the Energy Bill next week and have essential electricity market reforms up and running by 2014 as planned.

“They will allow us to meet our legally binding carbon reduction and renewable energy obligations and will bring on the investment required to keep the lights on and bills affordable for consumers.”

Public funding for renewable energy will rise from current spending of £2.35bn in 2012/13 to £7.6bn by 2020/21 but there will be no setting of a decarbonising target until 2016, a year after the next general election. There will also be certainty for those backing gas with the Chancellor due to announce the launch of a Gas Generation Strategy alongside his Autumn statement. The creation of the “Counterparty” to give long term confidence to investors for their Contracts for Difference will supposedly encourage more players intro the field of energy investment such as pension funds.

Reaction to the proposals has been fierce amongst green groups.

Reacting to today’s announcement that there will not be a decarbonisation target until at least after the next election, Friends of the Earth’s Executive Director Andy Atkins said: “The Coalition has caved in to Osborne’s reckless dash for gas and banged the final nail in the coffin of Cameron’s pledge to lead the greenest Government ever. This decision motivated by outdated ideology will help keep the nation hooked on increasingly expensive gas, drive away green jobs and investment and jeopardise UK climate goals.

“But the fight is far from over – there’s huge public and business support for power sector decarbonisation. Politicians from all parties must fight in Parliament against Osborne’s fossil-fuel addiction.”

Fellow environmentalist John Sauven of Greenpeace added: “By failing to agree to any carbon target for the power sector until after the next election David Cameron has allowed a militant tendency within his own ranks to derail the Energy Bill. It’s a blatant assault on the greening of the UK economy that leaves consumers vulnerable to rising gas prices, and sends billions of pounds of clean-tech investment to our economic rivals. The stakes couldn’t be higher for our climate, our bills, and new green jobs, yet politicians could not be making a greater hash of it.”

However the body representing suppliers and generators disagreed. Energy UK’s Chief Executive Angela Knight said: “This agreement is good news and we look forward to seeing the details of the Bill. We are pleased to see that the Levy Control Framework means that the UK will be building new power stations, including nuclear and renewables. This is a huge investment and must bring forward the jobs and economic growth that the UK needs. A gas generation strategy is also essential and we await the details with interest. Affordability for all customers, both businesses and households, must be at the core of the Government’s approach.”