A Swiss biofuels firm has been accused of leaving thousands hungry in Sierra Leone – one of Africa’s poorest countries – by the charity ActionAid. But Addax Bioenergy has stringently rebuffed the […] 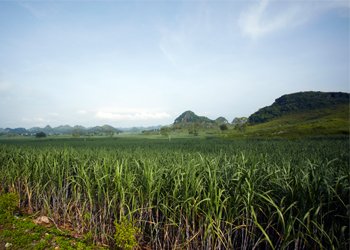 A Swiss biofuels firm has been accused of leaving thousands hungry in Sierra Leone – one of Africa’s poorest countries – by the charity ActionAid.

But Addax Bioenergy has stringently rebuffed the criticism in an open letter to ActionAid and has described the report as “flawed in many respects”.

Addax will soon begin the first commercial shipping of biofuel from Africa to Europe, using sugar cane grown on a 57,000 hectares plot of land in the Makeni region, which the company has leased for 50 years.

The projects consists of a sugarcane estate, an ethanol refinery and a biomass power plant which will supply the refinery and provide electricity to Sierra Leone’s national power grid.

The company broke ground on the project 2008 and it is set to be fully operational by the end of 2014. Addax said the biomass power plant will supply 20% of Sierra Leone’s electricity needs and described the project as a “model for responsible investment in Africa”.

But a report released by ActionAid said fuel for European cars is being produced at the cost of food for local villagers. The charity also claimed the lease was a ‘land grab’ as it was agreed without “free, prior and informed consent”; locals weren’t properly compensated and communities were made promises by the company that haven’t been met.

ActionAid conducted research in the area including 100 interviews with local villagers. Of those questioned 99 said food production had declined in the area, with 90 attributing hunger to Addax’s project. Another 78 of them said they hadn’t seen the land lease agreement and 82 told ActionAid they were unhappy with the bioenergy firm’s operations.

However the biofuel firm has responded forcefully to the criticism.

Simon Cleasby, its chief executive said: “Addax Bioenergy is disappointed that it was not given the opportunity by Action Aid to review the serious allegations in its report ahead of publication. The company has always maintained a public open-door policy to NGOs and interested observers.”

Speaking to ELN, Jorgen Sandstrom, Executive Officer at Addax Bioenergy was clearly frustrated by the report. He questioned why ActionAid had quoted harvesting figures from 2010 and 2011 when Addax’s work in the area was still very limited at the time and when more recent figures were publicly available. He also described the leasing of land as “very public” and criticised the charity for omitting the agreements from their analysis.