The UK Government is “working hard” to cut carbon emissions and tackle climate change in a bid to reach its target of achieving 80% of reduction by 2050, Ed Davey […] 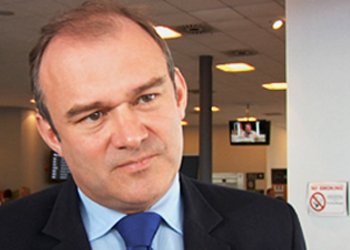 The UK Government is “working hard” to cut carbon emissions and tackle climate change in a bid to reach its target of achieving 80% of reduction by 2050, Ed Davey insisted.

The Energy Secretary was responding to a report published by the Environmental Audit Committee today on the progress of the UK’s current and future carbon budgets, which sets restrictions on the total amount of greenhouse gas emissions the nation can emit over a five-year period.

The Government has set the first four legally binding carbon budgets, covering the period from 2008 to 2027 and has committed to halving UK emissions relative to 1990 during the fourth carbon budget period (2023 to 2027).

Although the UK is on track to meet the current and second carbon budgets, it could miss out on the third and fourth targets, the Committee said. It is therefore calling on the Government to develop new policies to ensure the goals are met and step up efforts to increase the uptake of energy efficiency measures.

Mr Davey said: “The UK takes its obligations under the Climate Change Act, to cut emissions by 80% by 2050, extremely seriously. As the world’s most prominent climate scientists have said, we must not rest on our laurels if we want to avoid dangerous climate change.

“That’s why we are working hard both at home and abroad to cut emissions and help tackle the dangerous effects of climate change in an affordable way. We are reforming our electricity market to secure investment in low carbon energy and insulating our homes and businesses from the cost of fossil fuels. We are also working towards a binding global deal that will see all nations pledge to cut levels of carbon emissions.”

The Committee is also urging the Government to retain the fourth carbon budget target for the period 2023-2027, which it believes is crucial in preventing a global 2°C temperature rise.

Environmental group WWF supported the call and said the review of the UK’s fourth carbon budget – which is scheduled for next year – adds “needless political risk” to those posed by climate change.

Head of climate policy at WWF-UK Nick Molho added: “All the evidence suggests that delaying action on reducing emissions is a false economy – it will cost more and could result in the UK missing out on the significant growth opportunities of the low carbon economy.”