A new style of conference has tapped into the needs of energy managers to learn from each other and network more. Lively and interactive Energy Live 2013 yesterday won praise for […] 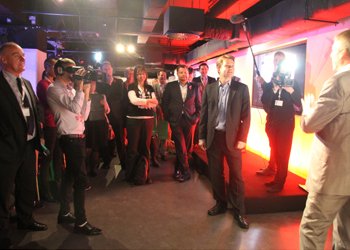 A new style of conference has tapped into the needs of energy managers to learn from each other and network more.

Lively and interactive Energy Live 2013 yesterday won praise for its quirky location, with an ‘open plan’ layout at London Film Museum seeing the main stage slap bang next to smaller side spaces for expert seminars.

Ben Brown, Sustainable Procurement Manager at London Borough of Haringey said it was a “fantastic venue, very interesting” adding: “It’s been really informative, there’s lots of different aspects to the event which makes it much more holistic than specific conferences or seminars that I’ve been to elsewhere.”

Mark Lowers, Energy Manager from the London Borough of Havering told ELN he liked the informal style of proceedings: “It’s much more relaxed than a lot of the normal ones you go for, it’s quite a good feel to it.”

As well as the break out events such as the ‘Cool Wall’ of energy efficiency (pictured) there was more emphasis on time for networking which went down well, with Ben Dhesi of Pulse Commercial Utilities saying: “It’s been really useful, there’s always something to do, a lot of networking actually which you don’t usually get at these types of events. It’s been a good opportunity to meet end users as well as suppliers.”

Jo Greenhill from Home Retail Group said she really enjoyed the seminars (pictured): “Coming to Energy Live 2013 has been really good, the seminar has been really close-knit and quite friendly with a mix of industries and it was thoroughly enjoyable. The speakers were really informative, they knew what they were talking about and it felt like people were confident in asking questions.”