'House of the future' gets green makeover

In 1998 a demo home billed as the ‘house of the future’ was built in Watford to show off the best of modern building technology. Fifteen years on, INTEGER house […] 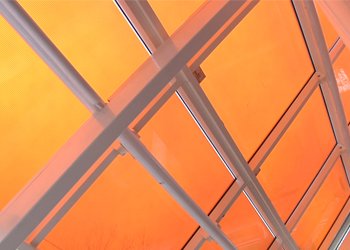 In 1998 a demo home billed as the ‘house of the future’ was built in Watford to show off the best of modern building technology.

Fifteen years on, INTEGER house is being refitted with all the latest green gadgets to make sure it’s worthy of the title.

The most obvious change is the addition of a new set of see-through solar panels (pictured). They aren’t entirely clear. The panels have a red tint because of the blue light they absorb.

Hamish Watson, Director of Polysolar – the maker of the panels – told ELN: “These are integrated into the roof so they’re a replacement for just conventional glass.”

Mr Watson added: “You’re producing power where you normally [wouldn’t] with virtually no additional cost, so the economics of it work better than a tack on addition. Basically it’s a building material.”

Another new feature is a novel type of wall tile, which was installed in a room that was prone to overheating.

The tiles contain a paraffin wax that absorbs heat and melts when the room is getting toasty during the day. Later at night when things are a bit cooler, the wax in the tiles re-solidifies, releasing the trapped energy back into the room.

There’s also a new centralised control system, which has command over not only the lights and heating but also a range of everyday appliances around the house.

Left the oven on? Don’t worry – there’s an app for that. The system can also be controlled wirelessly when you’re away from home.

The makeover isn’t quite finished yet but the house should be back open for visitors in spring.