GMB union members protested outside a Teeside waste-to-energy construction site today, claiming local workers were undercut by migrants. Recycling firm SITA has been accused of discriminating against local workers by […] 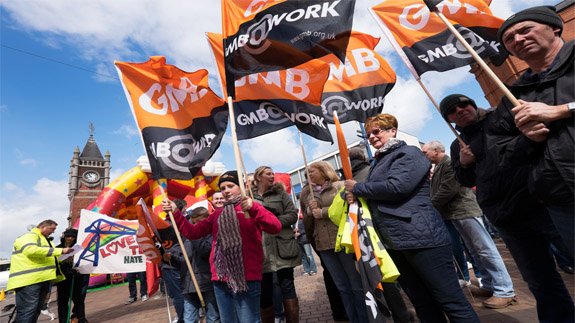 Recycling firm SITA has been accused of discriminating against local workers by “giving them no chance to get up to three quarters of the 400 jobs on the site at the construction phase of the job”.

The protest started at 6am at the ‘Wilton 11’ site and was organised by the Teesside Construction Committee.

He added: “The project is being built predominantly using migrant workers from Eastern Europe who are being paid £5 per hour below the agreed rates for engineering construction workers.

“This has saved SITA £4 million so far in labour costs. Meanwhile the local workforce is on the dole which is costing taxpayers at least £3 million per year.

“This protest is not against European labour working in this country but unscrupulous employers who insist on undercutting existing terms and conditions.”

SITA won the £1.6bn contract from the Merseyside Recycling and Waste Authority (MRWA) in April 2013.

It said no workers from the Wilton 11 site were involved in the protest and there was “no indication of dissatisfaction with pay and conditions”.

A SITA spokesperson added: “The fact is everyone working at Wilton 11 has rates of pay equivalent to or higher than each of the unions’ relevant national agreements.

“Allegations of low pay and the use of migrant labour to undercut the local workforce are simply untrue and no evidence has been put forward by the unions to support their allegations.”

He added: “I wouldn’t credit anything SITA has to say.”