‘COP21 is more important than dealing with ISIS’

The COP21 conference in Paris is more important than dealing with ISIS. That’s the view of Professor Julia Meaton from the University of Huddersfield who believes that “the dangers posed […] 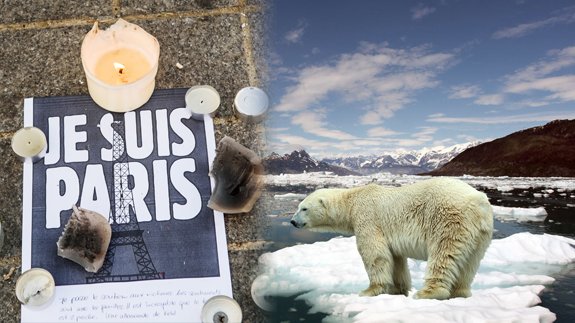 Terrorism and climate change which is more deadly? Image:Thinkstock

The COP21 conference in Paris is more important than dealing with ISIS.

That’s the view of Professor Julia Meaton from the University of Huddersfield who believes that “the dangers posed by climate change make the struggle with ISIS look like a local skirmish”.

Speaking to ELN she said: “When we start looking at the impacts of climate change in the next 20 or 30 years actually our safety will be far more compromised than these events [ISIS] that are happening today. If you look at ISIS yes they present a clear and present danger to us.

‘Minor issue’ compared to the climate

She added: “So what I’m saying is because of climate change we are going to have so much change on the ground…that we are going to be fighting issues on so many different fronts that the kind of stuff were looking at today, although of massive importance it will actually be a minor issue compared to what will happen if we don’t get to grips with our climate immediately.”

Asked if her comparison was deliberately provocative, the Professor said the context was more important.

“What I am trying to say is unless we wake up and do something about climate change we are going to have much greater risks that we have to face. These will be wars, there will be more terror.

“It is not comparing ISIS with climate change it’s comparing the risks we have to face and wiseing up to what we have to do to try and prevent the worst from happening.”

So if climate change is such an issue why is terrorism dominating the political agenda?

The number of people killed in cars everyday far outweighs the number in terrorist attacks.

“We focus on the scary things, the big bang things rather than the long drawn out nature of other events like climate change.

The Professor concluded: “Many people in the West don’t really understand the true impact of climate change and they are not concerned about it at all. Often they might think about polar bears or some islanders in the Pacific having to move, they don’t actually think about how it may impact on them.

“What I am trying to say is that actually climate change is going to impact on everybody wherever we are even in the relative safety of Western Europe.”

The COP21 talks are taking place all week in Paris.