A Basingstoke-based company is offering to install rapid chargers for electric vehicles (EVs) on forecourts and motorway services for free. InstaVolt says it will install and maintain the charging points […] 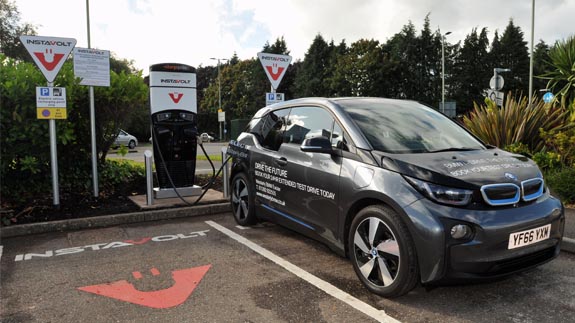 A Basingstoke-based company is offering to install rapid chargers for electric vehicles (EVs) on forecourts and motorway services for free.

InstaVolt says it will install and maintain the charging points at no cost and landowners who house the chargers will be given a rental income, saving them from having to make significant investments.

The firm will make its money from the sale of the electricity used by EV drivers.

The news comes as the government recently set out new rules for large fuel stations and motorway services to provide EV charging points across the UK.

InstaVolt told ELN the model has already proved successful for councils and business parks as it has been working with partners across a number of sectors, including local authorities and national gym chains.

It has installed charging points at Chineham Park in Basingstoke and for Mid Devon District Council, with plans to roll out more.

Tim Payne, CEO of InstaVolt said: “Some businesses we speak to can’t quite get their heads around the idea of us installing chargers for free. We’ve had a few councils turn us away initially because they think it’s too good to be true, installing charging points at no cost to the taxpayer.

“We want to reassure fuel retailers that the implications of the new Automated Vehicles Bill needn’t cost them a penny. We can handle everything from obtaining planning permission to upgrading chargers as technology evolves. What’s more, they can actually make a rental income from it.”

The firm, which received a £12m equity investment from Zouk Capital last year, aims to install 3,000 EV charging points across the UK by the end of the decade.