Two climate activists climbed aboard the 27,000-tonne platform as it was towed out into the North Sea 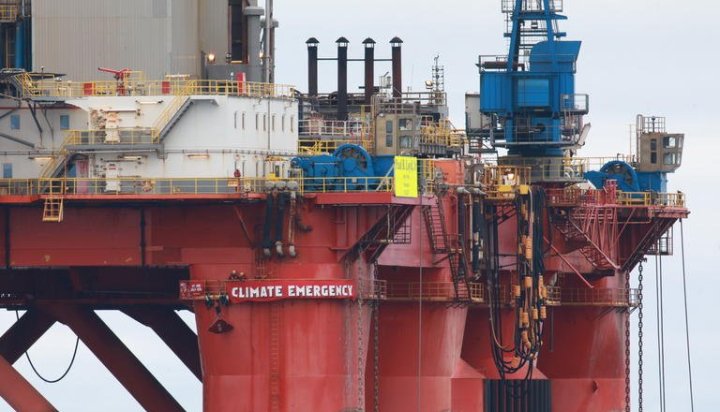 Greenpeace climate activists have boarded an oil rig being towed out to the North Sea to protest against continued fossil fuel exploration.

Two campaigners climbed onto the 27,000-tonne platform from a boat as it was being taken out of the Cromarty Firth – they did so in protest against BP’s plans to drill new oil wells in the North Sea.

The Paul B Loyd Jr rig is owned by Transocean and is being hired out to BP for £140,000 a day, the same owner/operator arrangement that was in effect during the Deepwater Horizon incident.

The rig was being towed out to the Vorlich field at about 6.30pm on Sunday when the protestors unfurled a banner bearing the words “climate emergency” from one of its support legs.

Greenpeace said they had enough food to stay in position for several days.

The campaigners want to see BP stop producing carbon dioxide emissions from burning fossil fuels and call for it to switch to investing in renewables.

Jo, one of the activists currently aboard the rig, said: “Warm words flow from BP on their commitment to tackling climate change.

“Yet this rig and the 30 million barrels it seeks to drill are a sure a sign that BP are committed to business as usual, fueling a climate emergency that threatens millions of lives and the future of the living world. We can’t let that happen – that’s why we’re here today.”

BP told ELN: “In all operations safety is our top priority. While we recognise the right for peaceful protest, the actions of this group are irresponsible and may put themselves and others unnecessarily at risk.

“We are working with Transocean – the rig’s owner and operator — and the authorities to assess the situation and resolve it peacefully and safely.

“We share the protestors’ concerns about the climate. We support the Paris agreement. And we are working every day to advance the world’s transition to a low carbon future.

“We’re reducing emissions from our own operations – down 1.7 million tonnes last year – improving our products to help our customers reduce their emissions and creating new low carbon businesses. We are committed to being part of the solution to the climate challenge facing all of us.”