Could retrofitting lampposts with plants give Londoners some breathing space?

Scotscape, Greenwich University and Grosvenor believe it could – they are piloting the idea in Belgravia’s Ebury Street 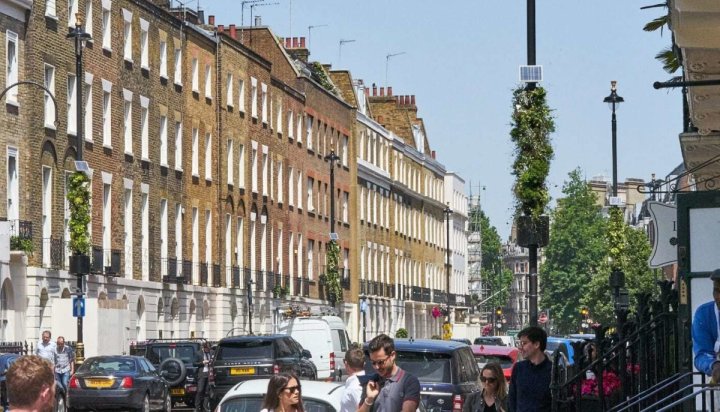 Could ‘vertically retrofitting’ London’s lampposts with plants provide a cure to the city’s harmful air pollution?

Scotscape, Greenwich University and Grosvenor believe it could – they are piloting the idea in Belgravia’s Ebury Street by attaching boxes of leafy plants to existing street furniture.

Their Smart Pillar pilot scheme will see pollution levels monitored by Greenwich University over the next year to assess the benefits delivered.

The companies involved say not only is the vegetation able to mitigate air pollution by absorbing carbon dioxide, it can also expand urban biodiversity, cool surrounding air through evapo-transpiration processes and reduce noise echoing off walls.

A ‘Smart Irrigation’ recirculation system has the added benefit of meaning no water is wasted.

They note lamppost-based plants are required because pipes under the pavement prevent large-scale tree planting on pavements and overhead tree canopies can trap toxic gases under their canopies.

With an estimated 494,000 lamp posts in Central London alone, hardy plants able to survive and clean the air all year round are expected to make a significant difference to the city’s illegal levels of air pollution.