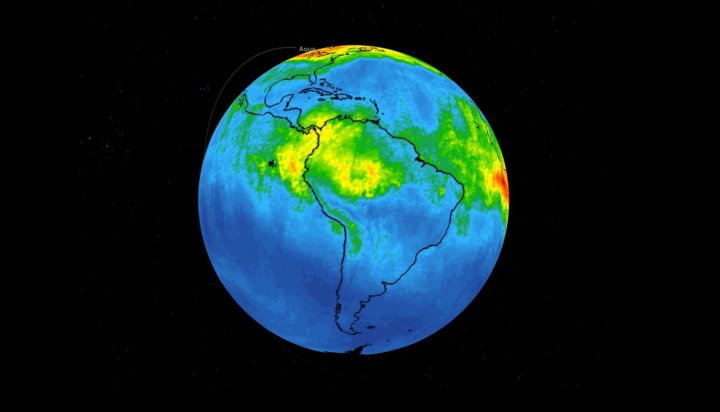 NASA has detected a giant plume of carbon monoxide from fires in the Amazon rainforest.

New data from its Atmospheric Infrared Sounder (AIRS) technology, aboard the Aqua satellite, shows movement in the atmosphere of carbon monoxide associated with fires in the Amazon region of Brazil from 8th August to 22nd August 2019.

Fires have been raging across the world’s largest tropical rainforest, one of the most important carbon sinks.

Carbon monoxide is a pollutant that can be transported large distances and persist in the atmosphere for about a month and has implications both for air pollution and climate change.

NASA’s time series maps carbon monoxide at an altitude of 18,000 feet and shows the plume growing in the northwest Amazon region, before drifting in a “more concentrated plume” towards the southeastern part of the country.

It says while the gas has little effect on the air people breathe at the high altitude mapped in the images, strong winds can carry it downward to where it can significantly impact air quality.

Green in the image indicates concentrations of carbon monoxide at approximately 100 parts per billion by volume (ppbv), yellow at around 120ppbv and dark red at 160ppbv but NASA notes the local values can be significantly higher.

Prime Minister Boris Johnson has pledged to provide £10 million towards helping the Amazon rainforest following the recent surge in fires.