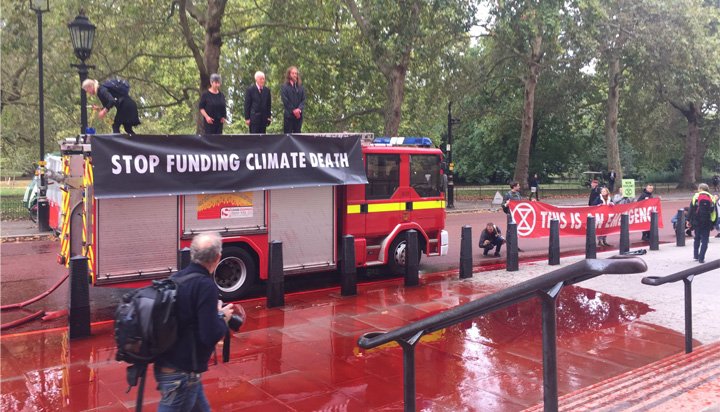 Eight Extinction Rebellion climate activists have been arrested in London after spraying fake blood outside the Treasury building this morning.

Four protesters stood on top of a fire engine and splattered part of the HM Treasury building in Westminster, however, they lost control of the powerful hose which led to the 1,800 litres of fake blood, made with food dye, being sprayed on the road.

Dressed in funeral attire, the activists said they were protesting “to highlight the inconsistency between the UK Government’s insistence that the UK is a world leader in tackling climate breakdown while pouring vast sums of money into fossil exploration and carbon intensive projects”.

Supporters of the group stood nearby holding banners saying “this is an emergency” and “act now”.

One of the protesters Diana Warner, a 60-year old retired GP added: “The situation around global heating and environmental destruction is so urgent that I am risking imprisonment. I consider what I am doing now with Extinction Rebellion to be more important than any other work I have done as a doctor and mother.”

Another activist Phil Kingston, an 83-year old retired lecturer in social work, said: “I fight with all my being for my four grandchildren in this situation of existential danger.

A spokesperson from Extinction Rebellion told ELN the action is part of a build-up towards the International Rebellion, which will start on Monday in more than 60 cities around the world.

They plan on blocking 12 areas around Westminster to demand government departments to “tell the truth” about the UK’s plans to tackle the climate emergency.

A HM Treasury spokesman said: “The UK is a world leader on climate change – having reduced its emissions by 42% between 1990 and 2017, while growing the economy by more than two thirds.

“In June, we became the first major economy to legislate to end our contribution to global warming by 2050. We will continue to build on this proud record.”