Energy switching data published today from the Energy Market Data Hub (EMDH) reveals that it is likely the COVID-19 pandemic has impacted change of supplier (CoS) activity. 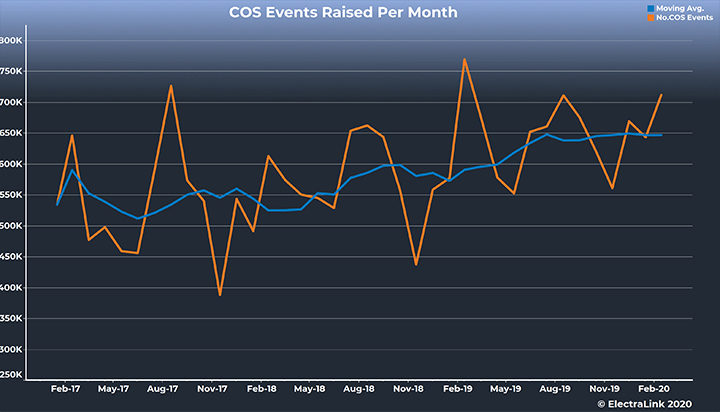 Energy switching data published today from the Energy Market Data Hub (EMDH) reveals that it is likely the COVID-19 pandemic has impacted change of supplier (CoS) activity.

For the past nine months, ElectraLink has been publishing high-level switching numbers on a monthly basis. Usually, ElectraLink would provide some analysis focused on completed switches within the month. Completed switches represent when a customer actually changes supplier: a long, drawn-out process that is normally started three to seven weeks prior to the switch being completed.

However, given the circumstances surrounding COVID-19, we have switched the focus of our analysis to switches started within the month of March which would be more reflective of the impact that COVID-19 is having on the energy industry.

Normally, within the month of March each year since 2017 the data observed would present a significant increase compared to the month of February. In 2017, switches started increased 20.1 percent from February to March. In 2018, the February-March increase was 24.7 percent. And in 2019, the increase was 33.3 percent.

Switches started in March 2020 reached 712,000 – a decrease of 7.5 percent compared to March last year. This is only a 9.5 percent increase on February 2020 switches started. In previous years, this percentage increase has been observed at between 20-33 percent.

Although it will take a few weeks for March’s switches started to reflect in switches completed, there is uncertainty as to whether April (another peak switching month) and the continued national lockdown will result in a rise in switches started.

This could potentially occur due to increased time and financial awareness from furloughed workers, although switches started could take another hit as consumers and SME business leaders prioritise COVID-19 awareness and activities ahead of switching energy supplier.

We have also seen a clear decline in the trend of daily switches started in March since the national lockdown began, which further validates our assumptions.

In terms of switches completed, 596,000 customers moved onto new suppliers last month, a decrease of 3.3 percent from March 2019’s remarkable high and a 16.4 percent increase from February 2020. March and April 2019 saw uniquely high numbers of CoS completed due to many tariffs ending in Q2 of last year and customers flocking to find better deals to avoid paying pricey standard variable tariffs with their existing supplier.

A new record was set in the switching types analysis. Switches between challenger brands reached an all-time high with 166,000 CoS completed. This is 10.1 percent higher than March 2019, the second highest month on record for challenger to challenger switches, and accounts for 27.8 percent of March 2020’s total switches. Big Six to challenger switches is the only category that decreased compared to last year:

As we mentioned above, we are uncertain whether COVID-19 delay measures, which have resulted in thousands being furloughed, will lead to an increase in customer switching requests, or whether switching energy supplier will drop from people’s priority lists as more people’s lives and businesses are disrupted. Tell us what you think on LinkedIn or Twitter.