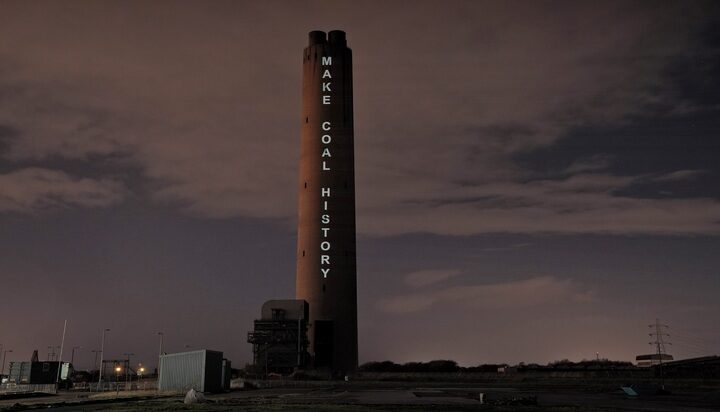 Image: Stewart Attwood All images © Stewart Attwood Photography 2021. All other rights are reserved. Use in any other context is expressly prohibited without prior permission. No Syndication Permitted. Fee for Use

Scotland has today reached a milestone in making coal history.

Scotland’s First Minister Nicola Sturgeon pushed the button earlier today to ignite 700 kilograms of explosives to bring down the chimney stack which had been there at the power station in Fife for almost half a century.

Beginning generation in 1970, the project was considered the largest coal-fired power station in Europe when first built.

Scotland has been coal-free since ScottishPower closed the station in 2016 – the energy company said it now only generates 100% green electricity through its wind and solar farms.

First Minister Nicola Sturgeon said: “Today’s event is a symbolic reminder that we have ended coal-fired power generation in Scotland, as we work in a fair and just way towards becoming a net zero nation by 2045.

“Our goal is to generate 50% of overall energy consumption from renewable sources by 2030, and Scotland’s energy sector is well placed to deliver on the key investments in renewables, hydrogen and energy storage required to achieve this.”

Keith Anderson, Chief Executive of ScottishPower, said: “For half a century, Longannet’s chimney has dominated the Firth of Forth skyline. We bade farewell to that landmark today – however, this is a landmark day for Scotland too.

“Watching the chimney of Scotland’s last coal-fired station fall today represents a real milestone, as the UK moves away from the large polluting power stations of the past and accelerates down the road to net zero emissions.”