Cutting water waste in the UK and increasing engagement and awareness around water efficiency, through work with organisations, has secured a national award for water retailer Water Plus 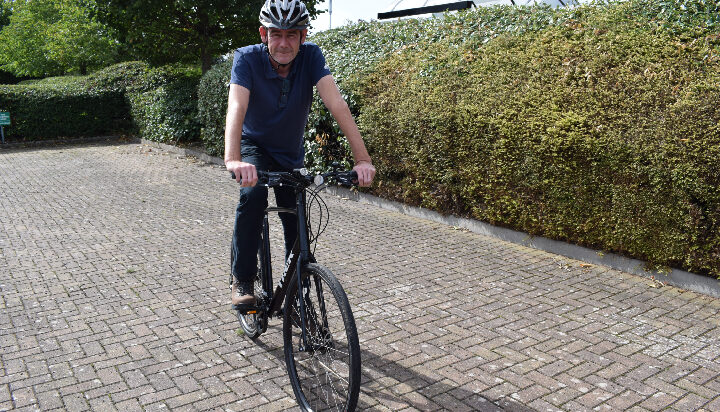 One of the Staffordshire employees at water retailer Water Plus, who is part of the Cycle to Work initiative by the company encouraging more greener transport options amongst employees to reduce impacts on the environment. Photo credit: Water Plus

It’s the sixth national award Water Plus has won in recent weeks – and they were the only water retailer to be shortlisted – and win in the National Sustainability Awards. The company won the Water Reduction Award for its results for customers – and its Be Wise On Water information campaign – and an award around supporting projects that prevent greenhouse gases being released, including encouraging greener transport take-up amongst employees.

Its work engaging businesses with their water use also saw customers in a survey say it’d saved energy, saved water and helped with budgeting.***

Amongst work with organisations large and small, Water Plus has provided over 590 water efficiency devices to a range of sites in six months, between December 2021 and June 12, 2022. It also installed 400 data loggers on water meters in the space of just six months at sites in 2021, to increase water tracking.

Andy Hughes, Water Plus Chief Executive, said: “We’re delighted to receive recognition of all our work to help organisations and raise awareness around the opportunities and savings – from looking closer at water use, to taking steps to cut waste to limit risks to how businesses and other organisations operate.

“Our technical water expertise and customer information and support is helping cut water waste across England and Scotland and identifying issues early that may cause disruption, which also help keep running costs low. Plus, less water waste means less carbon created, so less Scope 3 emissions, helping towards environmental targets and Net Zero. We’re committed to making sustainability and minimising our environmental impact core to our business, our people and our customers.”

The work between the Water Plus Advanced Services team and organisations in the UK – including installing data loggers on water meters in the last year, which feed information into a smart online portal, has resulted in an estimated £4 million of additional water waste being stopped in the space of just 17 months (and an estimated billion litres of water stopped from being lost unnecessarily)*.

It’s released a new series of podcasts around the importance of organisations looking closer at water use – released on Future Net Zero here – as part of its awareness-raising, engagement and education approach.

Through its engagement with organisations around water use and continually gaining efficiency, Water Plus has increased its market performance on meter reading-related activity.

The company, which have also become Green World Ambassadors this year to encourage more action by organisations to reduce impacts on the environment, was in the top three water retailers in market performance (MPS) scores at the start of this financial year.** Boosting the amount of meter reads in the market data help to update customer bills on actual water use, reduces bills based on estimated use and help organisations to budget and, in some cases, save energy where less hot water is used.

Water Plus also heard it had won four Green Apple Environment Awards this year. It won in the Water Efficiency category and the Partnerships category, along with awards for carbon reduction and for supporting habitats and biodiversity in the UK – and further afield. It’ll hear more about the prestigious awards its won later in 2022.

Water Plus was this year also shortlisted in the Water Industry Awards 2022 for Water Retailer of the Year, Water Efficiency Project of the Year and Skills and Workforce Initiative of the Year

More information – and examples – of how Water Plus is helping organisations, is available at: www.water-plus.co.uk/about-us/ .

Water Plus will receive four Green Apple Environment Award trophies and four certificates from The Green Organisation in November.

* From 1st January 2021 to 26th May 2022, estimated water loss totalling 1333399.46 m3 at an approximate cost of £4m – has now been stopped due to our engagement with organisations (statistic based on actual water meter readings for water loss that has been stopped through isolation or repair). There are 1,000 litres in a cubic metre of water. Estimate based on if the water loss had been running for 12 months.

*** Survey in February 2022 of customers contacted to encourage more water meter readings to track their use closer and submit more reads to Water Plus during a year. More than 43% of respondents to the survey had seen a benefit of reading their water meter more often, out of 65 who completed the survey. Of those who saw a benefit, 41% said they had saved water (with the example on the question of saving water helping to spot a leak or a dripping tap), and 20% had saved energy (with the example on the question of using less hot water).