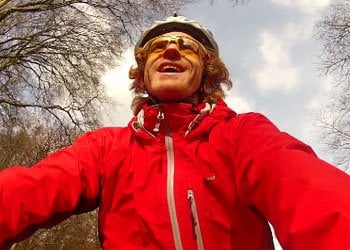 A London-based cyclist who is raising money for a solar charity with a round-the-world record attempt has pledged “to be back on road in a few days” after being hit by a truck in the United States yesterday.

Zimbabwe-born Sean Conway, who lives in North London is attempting to cycle 18,000 miles through Europe, Africa, North and South America in under 100 days.

Mr Conway set out on 18 February and had only just reached American soil when he announced on social networking site Facebook today: “Sorry for lack in communication. Yesterday morning I was hit by a truck. I’m ok but have been in hospital.”

He went on: “Leg hurts a bit but I am at least out of hospital”, while a picture showed a hugely swollen calf and purple bruise.

The cyclist added his bike was probably a write off “but [the] shop is trying to weld it.”

Messages of support flooded the cyclist’s Facebook page, with well-wishers hoping for his “speedy recovery” while another added: “Bet you came off unscathed whilst some massive lorry has a Sean IORN [sic] MAN dent in it!”

Mr Conway is aiming to raise £100,000 for the charity SolarAid, which works with and trains African communities to use, repair and sell solar power products.

Richard Turner at SolarAid said it was likely “the counter will stop” on Mr Conway’s record attempt, adding: “I’m sure he’s thinking, right, how do I get back on the bike!”

His record attempt can be followed at the website cyclingtheearth.

Watch ELN’s trip with Sean before he set off on our video archive.