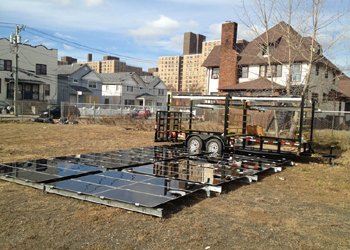 The students from Columbia University in New York City took the trailer – which attaches to the back of a car so it can harvest solar energy when you stop during the day – down to the New York coast where many are still without a power supply.

The system is being used to help a volunteering centre which is based in a church in one of the most badly affected areas, Rockaway Beach, where the students claim 90% of houses are still without power. The solar system is powering lights, refrigerators, computers, phone chargers and a temporary medical clinic.

The trailer was originally part of a project called Solar Journey USA to drive an electric car all the way round the States using only the power of the sun, which has been postponed to next year.

Garrett Fitzgerald and Rob van Haaren, students at the School of Engineering and Applied Science who are behind the project wrote in their blog: “Some people can afford a generator and have fuel brought in once a day, but the majority of Rockaway residents don’t have the money for this, or their houses were simply washed away”.

Luckily their solar array survived “in one piece” at a storage site, they said: “We figured it would be helpful to bring it out to Rockaway beach to help provide some electricity to residents and volunteers… A much better use of solar than letting it sit in a storage facility, isn’t it?!”