Do you live in a green power city?

Do you live in a green power city? Eight core cities across the country are pushing forward the Government’s low carbon ambitions, new research suggests. Faye Scott, who wrote the […] 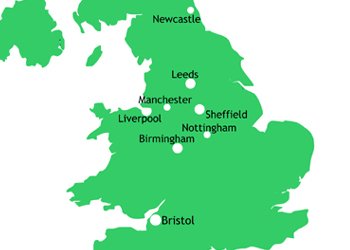 Do you live in a green power city? Eight core cities across the country are pushing forward the Government’s low carbon ambitions, new research suggests.

Faye Scott, who wrote the “Green cities” report for Green Alliance, looked at the deals done between the Government and these cities to pull the UK out of recession – and found the metropolitan centres have been beavering away in the green economy.

While Liverpool and Newcastle are harnessing their skills to offshore energy, Sheffield is manoeuvring itself to benefit from new nuclear with its existing metalworks.

Birmingham has pumped £3million into the Green Deal to get the efficiency scheme off the ground in its neighbourhoods. Along with Nottingham, the Midlands powerhouse is also expanding its district heating networks.

As for Manchester, its deal with the Government created a 50/50 joint venture that will develop investment opportunities for the Green Investment Bank, the new lending body for green business.

The south west’s Bristol was praised along with Manchester for its “credible” low carbon ambitions but the report says the cities missed the opportunity to use them to shape how their city deals approach growth.

The deals with these eight cities – which are known as ‘wave one’ – could be replicated with another 20 ‘wave two’ cities by November 2013.

With the eight existing deals expected to create 175,000 jobs over the next 20 years and 37,000 new apprenticeships, there is plenty more scope for green jobs elsewhere too, suggested the report, as cities already account for 58% of England’s population and 61% of its employment.