Three ports in the Humber region which will supply woodchips for Drax’s new biomass plant are splashing out £100million to cope with the new fuel source. The tide of new […] 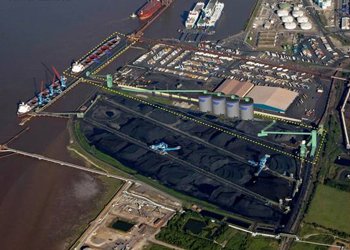 Three ports in the Humber region which will supply woodchips for Drax’s new biomass plant are splashing out £100million to cope with the new fuel source.

The tide of new investment will see the Ports of Hull, Goole and Immingham upgraded to handle millions of tonnes of wood pellet shipments, the Associated British Ports (ABP) announced today. That’s along with 100 construction jobs and more than 100 permanent roles once building is finished.

The revamp will help provide the power station at Selby with a steady stream of fuel after it converts three of its generators from coal to biomass. Currently it is the UK’s largest single producer of power, meeting roughly 7% of the UK’s electricity.

The Immingham port will get new silos to store up to three million tonnes of wood pellets a year (pictured, an artist’s impression of the new site) as well as equipment to load it off the ships and then put it on trains carrying it to Drax. It will also be rebuilt to accommodate huge new bulk carriers in the harbour.

Goole which is only seven miles from Drax will get extra warehouses while new storage facilities at Hull will have to cope with one million tonnes of biomass.

Dorothy Thompson, Drax’s Chief Executive said: “Investment in the biomass supply chain is critical to developing this nascent industry and realising its huge potential. Importantly, this investment helps to deliver both the low carbon and growth agendas set for the UK, whilst providing secure and reliable supplies of cost-effective renewable power.”

James Cooper, new Group Chief Executive for ABP which made the £100m investment said: “This investment at Hull, Immingham and Goole looks set to secure the Humber region’s position as a centre of excellence for the development of the low carbon energy future”.