Waste fat and oil from restaurants and clogged up drains underground (pictured) will soon power the UK’s largest sewage works. A new power station at Beckton in East London opening […] 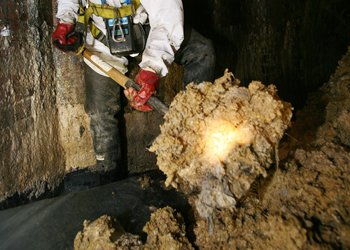 Waste fat and oil from restaurants and clogged up drains underground (pictured) will soon power the UK’s largest sewage works.

A new power station at Beckton in East London opening in 2015 will be the world’s largest fat-fuelled plant, it was announced this week.

The Combined Heat and intelligent Power (CHiP) station will be built with the sort of engine which normally powers large sea-going ships.

Thames Water says it has agreed to buy 75 GWh of this output to run its Beckton sewage works, which serves roughly 3.5 million people, as well as a nearby desalination plant which is used in times of drought or other emergencies.

Remaining power from the plant will be sold on to the national energy supply grid.

The water firm has committed to provide the power station with 30 tonnes a day of fat, oil and grease (FOG) enough to fill a six metre-long shipping container. That’s at least half of the fuel the generator needs to run.

Andrew Mercer, chief executive of 2OC said: “This is good for us, the environment, Thames Water and its customers. Our renewable power and heat from waste oils and fats is fully sustainable. When Thames doesn’t need our output, it will be made available to the grid meaning that power will be sourced, generated and used in London by Londoners.”

Leftover, low-grade cooking oil and food fat will be collected from food outlets and manufacturers. Solidified grease, such as from lamb and chicken, will be harvested from fat traps in restaurant kitchens and from pinch-points around the capital’s sewer network. The rest of the power plant’s fuel will come from waste vegetable oils and tallow (animal fat).