We’ll ground planes in winter to save fuel again – Ryanair

Budget airline Ryanair intends to ground some of its planes in winter again to save jet fuel, it said this week. After keeping 80 aircraft from flying over the winter […] 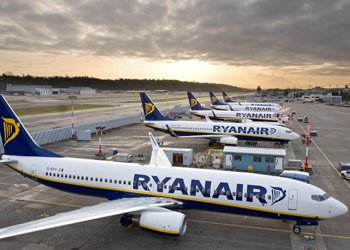 Budget airline Ryanair intends to ground some of its planes in winter again to save jet fuel, it said this week.

After keeping 80 aircraft from flying over the winter months last year it plans to ground around 60 in the coming winter.

The airline says fuel costs in the year running up to March 2013 rose to count for 45% of total operating costs, from 43% the previous year.

Fuel is placed at the top of a list of risk factors the company faces in its final annual report for investors for 2013.

In this investor statement, the firm explains: “Oil price rises and high winter charges at certain airports will make it commercially sound to ground up to 60 aircraft next winter (80 aircraft last year) rather than incur losses operating these aircraft at lower winter yields.”

The Irish firm which has around 82million customers goes on to suggest grounding planes isn’t necessarily a foolproof strategy, stating: “Ryanair’s adoption of the policy of seasonally grounding aircraft presents some risks… there can be no assurance that this strategy will be successful.”

While this avoids wasting fuel on half-empty flights, it “does not avoid fixed costs such as aircraft ownership costs and some staff costs” and “decreases” the potential to earn extra revenue from in-flight sales of food and duty free items, adds the firm.