Southwark Council ‘first’ in London to use waste to heat homes

Householders in a London borough will soon have their heating and hot water generated from an energy from waste facility under a new scheme announced today. Southwark Council has teamed […] 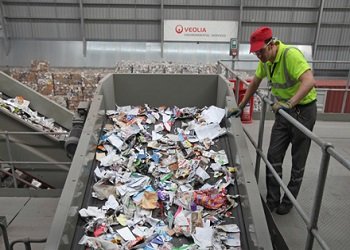 Householders in a London borough will soon have their heating and hot water generated from an energy from waste facility under a new scheme announced today.

Southwark Council has teamed up with its recycling and waste partner Veolia Environmental Services and launched a £7 million heating network which it claims is the “first of its kind” in the capital.

The heating and hot water will be generated through the South East London Combined Heat and Power (SELCHP) energy recovery facility, which processes around 430,000 tonnes of waste ever year.

The existing gas boilers on five estates in Rotherhithe will be switched off, which is expected to cut around 8,000 tonnes of carbon emission every year and it would also mean both a cheaper and much more energy efficient method of heating the homes.

The SELCHP facility was built in the 1990s and has generated electricity, which fed into the National Grid, but until now the extraction of heat in the form of hot water has not been possible.

The Mayor of London Boris Johnson said: “It is fantastic that SELCHP will soon be providing low carbon, low cost heating to homes in South East London through a new heat network, something I am working hard to encourage more of across the capital. Local heat and power supplies not only save Londoners money and reduce carbon emissions but also help to provide London with a more secure, sustainable, cost-effective energy supply.”

Last week the Green Investment Bank invested £20 million for the construction of a 15.8MW wood-fuelled combined heat and power plant in Northern Ireland. Fife Council in the Scottish Lowlands is also turning its food and garden waste into energy, which it expects will help save around £1.2 million.