Wind was fastest growing energy source in US last year

Wind power became the number one source of new electricity generation capacity for the first time in the US last year. According to new reports released by the US Department […] 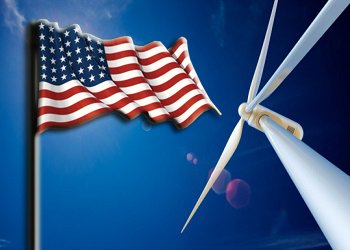 Wind power became the number one source of new electricity generation capacity for the first time in the US last year.

According to new reports released by the US Department of Energy, wind energy represented 43% of all new electricity additions and accounted for $25 billion (£16.3bn) in investments in 2012.

More than 13GW of new wind power capacity were added to the US grid – nearly double compared to 2011. That helped the nation’s total capacity surpass 60GW at the end of 2012, enough energy to power more than 15 million homes every year.

The total installed wind energy capacity has increased more than 22-fold since 2000 while 72% of the turbine equipment installed in the US last year was made by domestic manufacturers, nearly tripling from 25% in 2006-2007, the reports claim.

They also found nine states now rely on wind power for more than 12% of their total annual electricity consumption, with the renewable energy source contributing more than 20% in Iowa, South Dakota and Kansas. Texas added more wind power than any other state last year at 1,800MW and remains the leader with more than 12GW installed at the end of 2012.

The news is in stark contrast to the announcement last week when the American Wind Energy Association (AWEA) revealed no new installations were completed in the second quarter of 2013.

Energy Secretary Ernest Moniz said: “The tremendous growth in the US wind industry over the past few years underscores the importance of consistent policy that ensures America remains a leader in clean energy innovation. As the fastest growing source of power in the United States, wind is paving the way to a cleaner, more sustainable future that protects our air and water and provides affordable, clean renewable energy to more and more Americans.”

The reports, however, also suggest wind energy projections for future years are uncertain, partly due to policy uncertainty.

The US wind sector employs more than 80,000 people, including workers at manufacturing facilities in the supply chain as well as engineers and construction workers who build the wind installations.

Last week the UK Government pledged it would invest £66 million in the offshore wind industry in the country.