The House of Lords yesterday voted in favour of forcing coal-fired power plants to cut their greenhouse gas emissions. The Government was defeated by the Labour party by 237 to […] 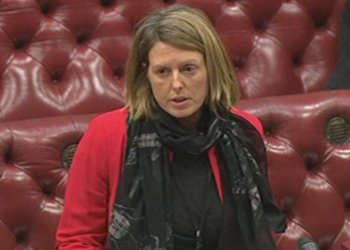 The House of Lords yesterday voted in favour of forcing coal-fired power plants to cut their greenhouse gas emissions.

The Government was defeated by the Labour party by 237 to 193 as the Lords agreed to get plant operators to apply the Emissions Performance Standard (EPS) to cut their carbon emissions.

Power plants using coal, largely considered to be the dirtiest energy source, could upgrade their systems using carbon capture and storage (CCS) in order to avoid reducing their emissions. The amendment supported by the Lords will force all coal powered stations to curb their emissions.

It will however still need to be considered by MPs who could vote to overturn it when the Energy Bill returns to the House of Commons.

Shadow Energy Minister Baroness Worthington (pictured), who led the vote, said the EPS is not currently consistent with the UK’s decarbonisation objectives.

She added: “Low coal prices and high gas prices have caused coal stations now to be operating at higher levels than they have ever before. As a result we’ve seen UK emissions going up and not down and our carbon intensity increasing last year not decreasing. How are we going to hit [our] decarbonisation target if we do not have a tool in our armoury to do something about this issue?”

She went on: “If we don’t take this most obvious, most easy, most simple way of reducing our carbon emissions… we will be forced to adopt more expensive subsidies.”

Energy Minister Baroness Verma however warned the amendment risks “deterring or increasing” the cost of new gas investments as well as increase cost to consumers and risk security of supply.

She said: “The Government’s goal is an orderly transition away from coal to lower carbon fuels over time in a way which was does not create unnecessary costs for consumers.

“While we do not expect large numbers of coal plants to invest in clean-up equipment a very small number of our efficient plants may wish to do so. This amendment is very likely to deter that investment.”

The news to toughen up pollution controls has been welcomed by environmental groups.

Joss Garman, deputy political director of Greenpeace said: “Cutting carbon pollution from coal burning is the cheapest and most effective way to clean up the energy system.”

Friends of the Earth Head of Campaigns Andrew Pendleton added: “Coal is an out of date technology and it’s right that the Lords have voted to rein it in – the House of Commons must adopt the same policy.”

Coal power plant operators are unlikely to welcome the news although many in the UK have already closed plants or at least plan to shut them down in the next couple of years.