Scotland hits out at DECC for supporting ‘nuclear over wind’

Scottish Energy Minister Fergus Ewing (pictured) has accused the UK Government of being “hell-bent on ploughing billions” into nuclear power stations but restricting support for renewable energy. The reaction comes […] 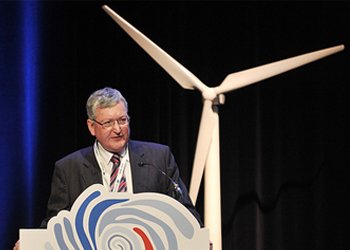 The reaction comes after all three of Scotland’s planned offshore wind farms were excluded from a list of renewable energy projects that will be eligible for early support from March.

The chosen 10 projects which will get a Final Investment Decision (FID) contract were revealed when DECC published the final Electricity Market Reform (EMR) plan yesterday.

Mr Ewing said the announcement has “serious implications” for Scotland’s ability to release the power of offshore wind and increases uncertainty for both developers and investors.

He said he will write to Energy Secretary Ed Davey to urge him to reverse the decision on the FID enabling plans.

The Scottish Minister said: “There is still the opportunity for Scottish projects to be included in the final list of projects by DECC and we will be arguing that instead of putting barriers in the way of Scottish offshore wind deployment the UK government should be providing support.”

He added: “Scotland is leading the development of an exciting, new renewables industry. Developing a new industry is challenging under any circumstances but the UK Government is increasing those challenges. They should be supporting the release of our green energy potential instead of being hell-bent on ploughing billions into nuclear power stations – which restricts the funds available to support renewables.”

A DECC spokesperson said: “We never said that every application was guaranteed to receive support. Sixteen projects received a draft investment contract, some have been provisionally assessed as not affordable but the final affordability assessment will not be carried out until spring next year once projects have confirmed that they definitely want an investment contract.

“If they do not receive a contract applicants are also eligible to apply for support under the RO or the CfD regime, where appropriate.”

Scotland plans to deliver 5GW of offshore wind by 2020. Earlier this year the UK Government guaranteed power prices for a nuclear power station at Hinkley Point in Somerset for 35 years.