Two wind turbines (pictured) installed at Japanese automotive giant Honda’s factory in the US have started producing power. Located in Russells Point in Ohio, they are expected to generate around […] 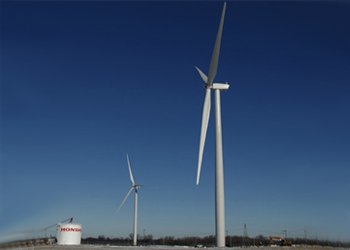 Located in Russells Point in Ohio, they are expected to generate around 10,000MWh of electricity per year and supply 10% of the factory’s needs while also cutting carbon emissions.

Energy services company ConEdison Solutions will own and operate the turbines through its subsidiary RP Wind.

Gary Hand, Vice President of Honda Transmission said: “We appreciate the support we have received from the township and our neighbours throughout all phases of the project that will help Honda work toward our goal of reducing CO2 emissions. This is just one of many ways that Honda is seeking to reduce our environmental footprint.”

The carmaker has set a target to cut carbon emissions by 30% by the end of the decade compared to 2000 levels.

Last year Honda revealed it would invest around 100 million Brazilian reals (£32m) to develop a wind farm in Brazil.