The world’s largest offshore wind farm in London was seen from space, photos released by NASA reveal. Taken by its Landsat 8 satellite, it shows the London Array’s 175 turbines […] 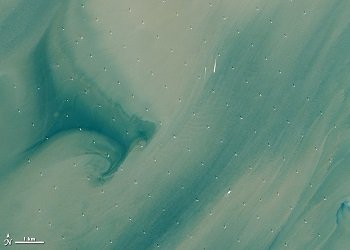 Taken by its Landsat 8 satellite, it shows the London Array’s 175 turbines as white dots (pictured) in the Thames Estuary, where the River Thames meets the North Sea.

The turbines are spread over 40 square miles with each generator sitting between 2,100 and 3,900 feet apart, according to NASA’s Earth Observatory. Each is connected by cables buried in the seafloor and power is transmitted to two substations offshore and to an onshore station at Cleve Hill.

The image of the wind farm, which has been fully operational since April last year, was captured twenty days later. The London Array has a total capacity of 630MW, enough to supply power to 500,000 homes.