Nuclear power needs to keep political support behind it in order to keep it cheap. That’s according to a new inquiry co-chaired by former Energy Minister and MP Charles Hendry […] 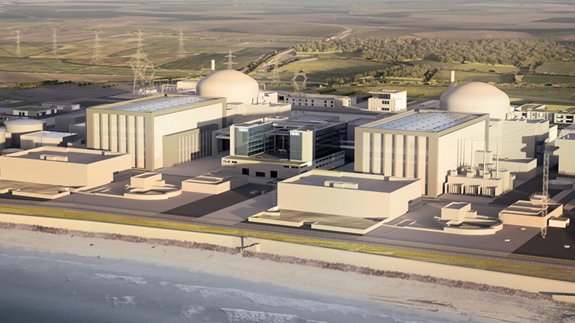 What Hinkley Point C will look like. Image: EDF Energy

Nuclear power needs to keep political support behind it in order to keep it cheap.

That’s according to a new inquiry co-chaired by former Energy Minister and MP Charles Hendry which found political consensus is “critical” because planning and building the power stations often spans two to three political cycles.

Currently the UK’s three largest political parties all back nuclear power – which would avoid a backtrack if power changes hands between elections.

Called ‘Power from Nuclear’, the report sponsored by Costain suggests no one knows what will be the cheapest power source in 2020s which is why all types should be in the energy mix.

It also flags up the stalled hunt for a nuclear waste store and suggests the Government “urgently revisit” the process.

Elsewhere, it suggests getting approval from the European Commission for the Government’s contract with EDF for Hinkley Point C is one of the most “immediate challenges” facing UK energy reforms.

Any delays to building new plants could affect the affordability of energy and plans to cut carbon emissions as well as our security of energy supply for 2019-2024, suggests the report.

Speaking ahead of the launch today, Charles Hendry MP said: “The report concludes that nuclear can play a very significant role in delivering secure, low carbon electricity but there is much work still to be done to secure the nuclear renaissance that many of us want to see.”