The threat of the UK’s possible exit from the EU is affecting investment in energy and low carbon projects. That’s according to Sir Ed Davey, former Energy Secretary and Chair […] 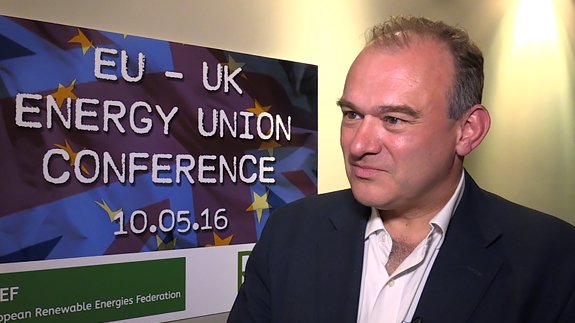 The threat of the UK’s possible exit from the EU is affecting investment in energy and low carbon projects.

That’s according to Sir Ed Davey, former Energy Secretary and Chair of Mongoose Energy, who believes the referendum on whether the nation leaves the EU or not is already hitting the country’s economy.

Speaking to ELN at the Renewable Energy Association’s ‘UK-EU Energy Union’ conference he said: “Of course if we were to leave, if we were very stupid and voted for Brexit, which I’m totally against, I’m a strong believer that Britain is stronger, safer and more prosperous in the EU but if we were to vote to leave, I’m afraid that would send a very bad signal to investors.

“There are a lot of people who look to Britain being in the EU as a way for trade in the Single Market but also to have greater stability of policy because you agree policy in some areas at least at the European Union level and that constraint on silly positions to Westminster will be gone. So I think Brexit is already bad news and if we were to vote in favor of it, it would be a disaster.”

Mr Davey added the UK is not on track to achieving its 2020 target of generating 15% of its energy consumption for clean sources.

He believes the country will only produce 12% during that period due to “mistakes in energy policies” so far.

He said: “The fact they have been against onshore wind, they’re attacking solar, they got rid of zero carbon homes allowance, they are applying a green tax to renewables, I mean this is all nonsense.

“And is totally undermining investment and investors and it means jobs are going, businesses are closing so I think they’re currently on a disastrous path.”

Talking about the latest EY’s report which ranked the UK in 13th position for attracting investment in renewables, the former Liberal Democrat MP said it shows “the UK Government and the Conservatives are making a mess of Britain’s renewables strategy”.

He went on: “It’s going in a completely opposite direction from the rest of the world and that’s why Britain has slipped to its lowest place ever in the EY analysis of favourite countries to invest in renewables.

“If I was in government I’d be really worried, I’d be realising that they have no green credentials left, they’re making huge mistakes, they won’t be up to meet their targets.”