Climate activists protesting against Heathrow’s planned third runaway have blocked a road and tunnel leading to the terminals. Three Rising Up! protesters have chained themselves to a vehicle in protest […] 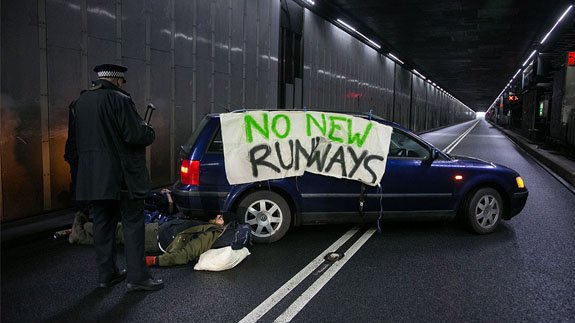 Climate activists protesting against Heathrow’s planned third runaway have blocked a road and tunnel leading to the terminals.

Three Rising Up! protesters have chained themselves to a vehicle in protest against the plans, which comes amidst a four-month long public consultation.

Simon Bramwell, one of the activists involved described the consultation process as “illegitimate and undemocratic”.

He said: “This blockade is our contribution to the consultation: a third runway is a disastrous option that will lead to climate chaos. I look upon my niece and nephew, upon the children who will inherit the future we are creating right now and my conscience tells me to act.”

Rising Up! spokesperson Laura Bedford claims “thousands of local residents are set to lose their homes and 300,000 people a year lose their lives due to the effects of climate change”.

Ms Bedford added: “A third runway will be disastrous for the climate: the extra 250,000 flights a year will emit as much Carbon Dioxide as the entire country of Kenya at a time when we need to be reducing CO2 emissions in line with the 2008 Climate Change Act.

“The leader of the world’s dirtiest economy may be a passionate climate change denier but the decision to expand Heathrow show that Theresa May is Trump’s political ally in enacting this life-destroying extremism. The need to take action is immediate.”

The government has said planning consent for the third runway will only be granted if it can be delivered within existing air quality limits and climate change obligations.

A spokesman for Heathrow airport said: “Heathrow supports the right to peaceful protest within the law, but the safety and security of our passengers, aircraft and colleagues together with the smooth running of the operation is paramount.”