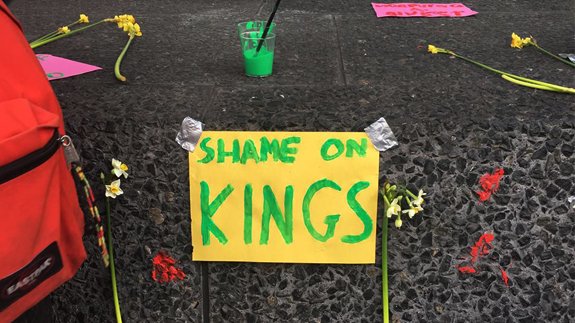 A PhD researcher at King’s College London (KCL) has started a hunger strike protest to call for fossil fuel divestment.

Roger Hallam is part of the King’s Climate Change Emergency (KCCE) group, which alongside Fossil Free KCL, is campaigning against the university’s continued investment in fossil fuels.

He has previously been arrested and detained overnight for daubing a column at the university with poster paint. He was charged with criminal damage and fined £500 by a magistrate.

The KCCE group has said it is demanding divestment from all fossil fuels and breaking whatever rules need to be broken to pressure college bosses to take notice.

Mr Hallam said: “After signing petitions and sitting in committees for years it has now become necessary to take drastic steps to persuade this university to act after it has been ignoring the basic science on climate change for three decades. They’re so reluctant it’s unbelievable.”

The campaign is now planning what it says will be the largest act of civil disobedience ever undertaken by the fossil fuel divestment movement – covering the front of the university’s buildings with hundreds of flowers, statements, balloons and paintings at 11am on Saturday the 4th of March, 2017.

A KCL spokesperson said: “The university has successfully engaged with students since November 2014 on the issue of climate change and following this a policy was agreed by our governing Council in September 2016.

“This Policy was supported by the Fossil Free KCL campaign and will see the university reducing investments in companies involved in the ‘dirtiest’ fuels like tar sands oil and thermal coal and move towards opportunities to support low carbon alternatives.”

The World Medical Association (WMA) has called on its members to divest from fossil fuels.