Green Party pledges to ‘take back control’ of energy system

The Green Party has pledged to “take back control” of the energy system as it launched its environment manifesto. Co-leaders Caroline Lucas and Jonathan Bartley said they will also introduce […] 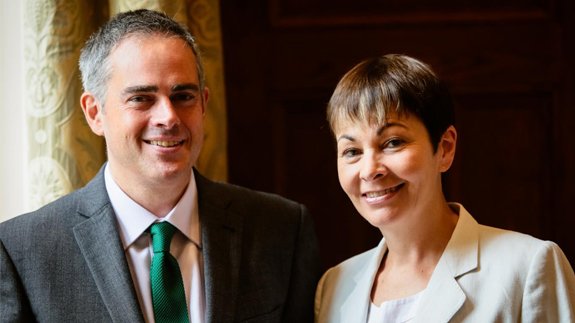 The Green Party has pledged to “take back control” of the energy system as it launched its environment manifesto.

Co-leaders Caroline Lucas and Jonathan Bartley said they will also introduce a ban on fracking, end the ban on onshore wind support, stop the “reckless gamble” with nuclear power, phase out fossil fuel subsidies and bring forward the coal phase out date to 2023.

They have also promised to levy a one-off fine on car manufacturers who cheated the emissions tests as well as create a new Clean Air Act, with a mandatory Clean Air Zone network.

The party says it will increase Vehicle Excise Duty on new diesel vehicles, introduce a scrappage scheme and promote cycling and walking through a £2 billion investment programme.

It aims to ensure existing environmental laws are retained or enhanced, regardless of the UK’s future relationship with the EU and create a regulator and court to monitor and enforce green laws.

The manifesto states: “Our energy system is broken and is not delivering what households and businesses need. Captured by corporate profit ripping us off and fuelled by dirty energy that belongs in the past, it is failing us both as customers and as citizens.

“We need to harness the dramatically falling costs of renewable energy and seize the opportunity to both tackle climate change and take back control of our energy system. The Green party would end the monopoly of the Big Six and ensure that no one is forced to live in fuel poverty – whilst also democratising the way energy assets are funded.”

Ms Lucas tweeted: “A prosperous future will be Green – or not at all.”

The Conservative Party has pledged to cap “rip-off” energy prices while Labour is reportedly planning to renationalise parts of the energy industry.