Former US President Bill Clinton has opened a state-supported 2.7MW solar plant in the US. The New York State Energy Research and Development Authority (NYSERDA) and EnterSolar have announced the […] 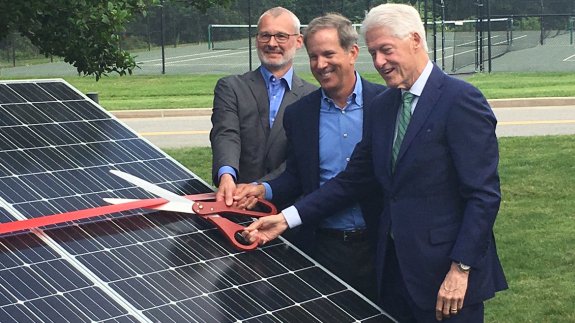 Former US President Bill Clinton has opened a state-supported 2.7MW solar plant in the US.

The 7,720 solar panels, installed across 10 acres of previously unused land, are expected to generate more than 60% of the site’s power requirements and avoid more than 2,250 tonnes of carbon emissions per year.

Since 2011, solar in New York State has increased by nearly 800% and there are now more than 8,000 people employed by the sector across the state.

It will bring New York closer to Governor Cuomo’s Clean Energy Standard, which requires half of the state’s electricity to come from renewable energy sources by 2030.

Paul Ahern, President of EnterSolar, said: “We are proud to partner with Swiss Re to develop a system that will power nearly two-thirds of their energy needs but also to help them demonstrate that commitment to their employees, their partners, their neighbors and the State.”