All of the Fuel Element Debris (FED) waste from the former Bradwell nuclear power station has now been cleared. The Nuclear Decommissioning Authority (NDA) says the clearing of the intermediate […] 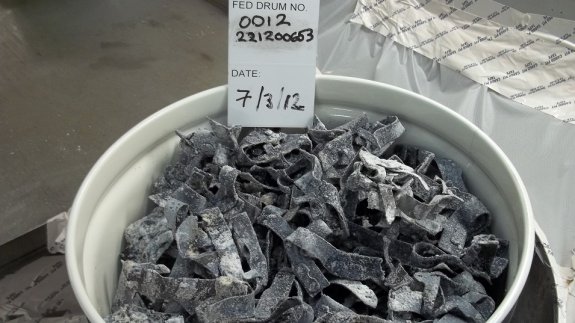 All of the Fuel Element Debris (FED) waste from the former Bradwell nuclear power station has now been cleared.

The Nuclear Decommissioning Authority (NDA) says the clearing of the intermediate level radioactive waste from the Essex site is an important step towards the site’s planned clean-up and final closure.

A range of innovative techniques were used to manage the waste, which mainly consists of pieces of the magnesium alloy cladding that surrounds Magnox nuclear fuel.

Around 65 tonnes of the material was dissolved in acid on-site, which separated the radioactive materials and reduced the volume of the solid waste by more than 90%, shortening the FED treatment process by more than a year.

More than half of the FED waste was re-classified as suitable for disposal as Low Level Waste (LLW) – around 140 tonnes have been sent to the LLW Repository in West Cumbria, saving around two years of further treatment.

The used fuel ponds complex at the site has also been demolished.

NDA Chief Executive, David Peattie, said: “This is another really important milestone and a huge step forward in cleaning up and decommissioning the UK’s earliest nuclear sites.

“Finding new solutions and techniques to deal with radioactive waste is helping us to do things more quickly and efficiently, making our sites safer sooner and providing best value for the taxpayer.”

The UK Government was forced to pay £100 million of taxpayers’ money to two US engineering firms after mishandling a nuclear decommissioning contract.