A total of 44 towns and cities in the UK are in breach of the recommended World Health Organisation (WHO) guidelines for air quality. New research published by the Royal […] 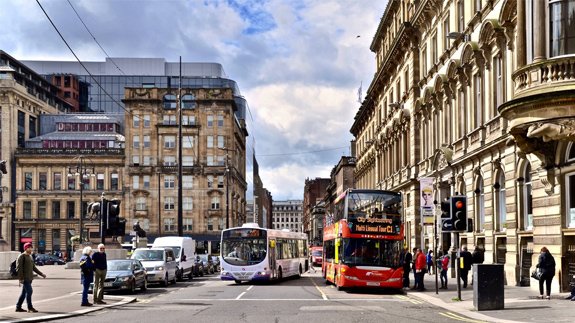 Glasgow is found to be more polluted than London. Image: lou armor/Shutterstock

A total of 44 towns and cities in the UK are in breach of the recommended World Health Organisation (WHO) guidelines for air quality.

New research published by the Royal College of Physicians (RCP) and Lancet Countdown highlights concern about the “lack of a robust, fully funded national strategy” for delivering air quality improvements, despite warning from both the Supreme Court and the European Commission.

Air pollution in the UK leads to around 40,000 premature deaths, more than six million sick days and an estimated total social cost of £22.6 billion per year.

The research reveals Glasgow emits the highest levels of PM10 annually at 23μg/m3, followed by Leeds and London at 22μg/m3.

It is calling on the government to act on air pollution as an urgent policy priority as cleaner air can help prevent disease and suffering, reduce premature mortality and save billions in public money while cutting emissions.

Dr Toby Hillman, RCP’s lead on sustainability said: “We know that high exposures in early life have a major effect on lung and cognitive development throughout an individual’s life – that is why it is the government’s duty to improve the air we breathe and to ensure that people across the UK are not exposed to such a preventable cause of death and illness.

“Addressing climate change and poor air quality isn’t a burden or cost but fundamentally an opportunity we should grasp with both hands.”

The Department for Environment, Food and Rural Affairs (Defra) said it has put in place a £3 billion plan to improve air quality and reduce harmful emissions.

A spokesperson added: “We will also end the sale of new diesel and petrol cars by 2040 and next year we will publish a comprehensive Clean Air Strategy which will set out further steps to tackle air pollution. We now have an opportunity to deliver a Green Brexit and improve environmental standards as we leave the EU.”