It is the UK’s first subsea electricity interconnector to Belgium 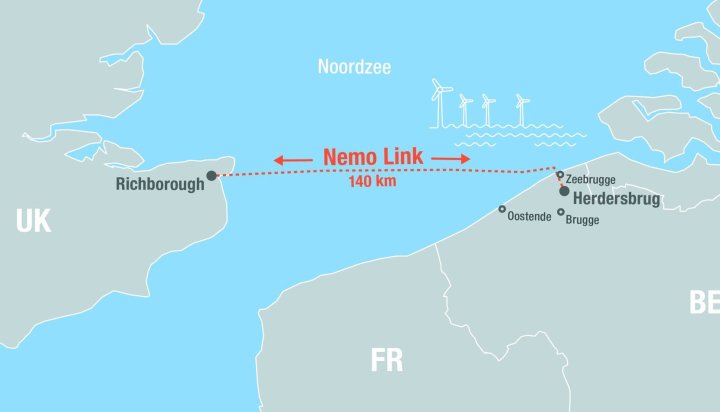 A new subsea power interconnector linking the UK and Belgium is now live and has entered commercial operation.

The 1GW Nemo Link, a joint venture between National Grid and Belgian transmission system operator Elia, stretches 80 miles from Herdersbrug on the Belgian coast to Richborough in Kent and has the capacity to power one million homes.

Electricity has been flowing from Belgium to the UK since midnight and more than 75% of capacity has been reserved by power traders.

A new 20km overhead line and substations have also been built for the Richborough Connection.

It is National Grid’s third interconnector to Europe, following the 2GW IFA link which connects the UK to France and BritNed, which joins the UK to the Netherlands with 1GW of capacity.

National Grid CEO John Pettigrew said: “We’re delighted that Nemo Link and the Richborough Connection are now both fully operational and will play a key role in delivering cleaner energy to UK consumers, while also making supplies more secure and competitive. Interconnectors like Nemo Link are the perfect tool to move renewable energy from where it is produced to where it is needed most.

“By connecting the UK and Belgian electricity markets, we will also ensure customers have access to different sources of generation and lower priced electricity. This will mean that customers pay less for their energy.”

Since construction began in 2015, more than 1,400 engineers and project specialists have worked on the power link, with more than 2.6 million hours spent on the project, excluding manufacturing.

Last November, the 1.4GW Viking Link, which will connect the UK with Denmark, was given financial approval for construction.