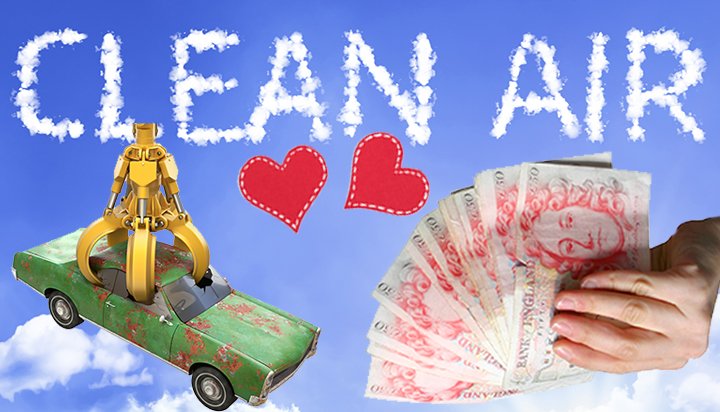 London Mayor Sadiq Khan is showing his love for clean air this Valentine’s Day with a commitment to more than double a vehicle scrappage fund.

He has announced a £25 million car scrappage fund – in addition to a previous £23 million pledge – which will enable microbusinesses to scrap older vans and low income householders to scrap old and polluting cars.

The scheme aims to get rid of the dirtiest diesels and petrol vehicles in the capital and replace them with cleaner alternatives.

Statistics from cities network UK100 suggest the fund, details of which will be published later this year, could pay for nearly half a million older, polluting cars, vans and buses.

The announcement comes as the mayor, along with UK100, is bringing together city leaders from across the UK for talks with government ministers today, to call on the government to deliver an “urgently needed” national vehicle upgrade fund and tackle air pollution.

Toxic air leads to around 40,000 premature deaths every year and increases the risk of asthma, cancer and dementia, costing the economy more than £20 billion a year.

More than 400 schools in London are also said to be in areas with illegally high air pollution limits.

Mr Khan said: “Our country’s filthy air is a national disgrace that shortens lives, damages our lungs and severely impacts our NHS. City leaders across the country are united in raising the alarm about the dangers posed by poor air quality. Here in London, we have worked tirelessly to clean-up the bus and taxi fleet, encourage clean air innovation and establish the largest air quality monitoring network of any major world city.

“Now with sevens weeks to go until the introduction of the 24-hour, seven-day-a-week Ultra Low Emission Zone in central London, I’m announcing plans to help motorists on low incomes, as well as microbusinesses, to scrap their older, more polluting vehicles. However, ministers must now show they can match my commitment. If we’re going to tackle the health crisis and social injustice caused by air pollution it is vital and only fair that a national vehicle scrappage scheme is funded and supported by the government.”