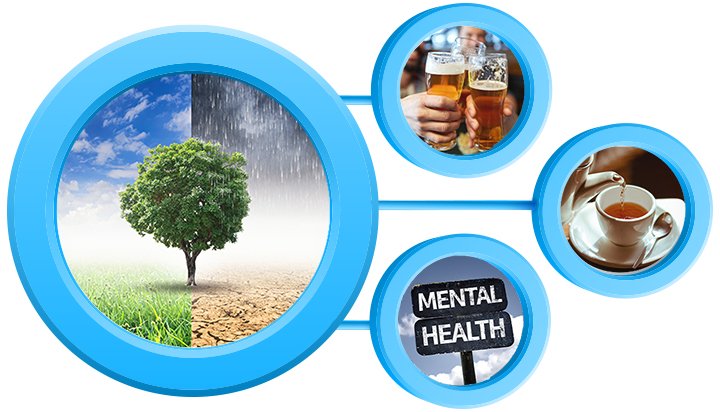 This may come as a surprise to some of you – but beer, tea and mental health are all affected by climate change.

The Climate Coalition has created an unusual list of things that are to be impacted by the changing climate, following the UK Government’s recent pledge to ensure net zero emissions by 2050.

The good old pint is not exempt from the impacts of climate change. In addition to water shortages, brewers are growing increasingly concerned about the second key ingredient – barley. Drought in the UK significantly damages barley crops, along with other grains. The production and quality of hops are similarly threatened by increasing temperatures.

Allergies are expected to worsen. Pollen is produced at a higher rate when plants are exposed to warmer temperatures and higher levels of CO2, two hallmarks of our changing climate. Not only this but higher temperatures may lengthen the period in which plants produce pollen.

A national staple but tea production is due to be drastically influenced by climate change, with key regions set to experience significant reductions in production as a result of warming temperatures and the quality also expected to decline.

In a warming climate, food is expected to expire faster as the bacteria responsible for making food go mouldy multiplies faster in higher temperatures. This will add to the seven million tonnes of food thrown out by UK households every year.

Miles of the UK’s most beautiful beaches could be lost. Higher global temperatures have a direct impact on rising sea levels, which cause cliffs to collapse and beaches to flood.

With flooded football pitches and rained off cricket matches, climate change is disrupting some of the nation’s most-loved sports. Winter sports are similarly threatened, with milder winters set to reduce snowfall – some of Scotland’s top resorts are now forced to spend thousands of pounds on artificial snow.

Several studies have found a relationship between increased temperatures and fatal car accidents, with hot weather making drivers fatigued. As heatwaves are expected to increase in frequency and severity in the UK, car crashes may unfortunately become more frequent over the coming years.

Extreme weather events are set to become more frequent due to climate change. To make matters worse, the aftermath of such events is plagued by difficulties claiming home insurance. In the US, thousands of people lost coverage after extreme weather, while closer to home, insurance premiums have already increased by 7.6%.

Energy and Clean Growth Minister Chris Skidmore said: “Climate change is one of the most urgent and pressing challenges we face today. That is why we have made a commitment – as the first major economy to legislate – to reach net zero emissions by 2050 and put clean growth at the heart of our modern Industrial Strategy.

“We will also be hosting Green Great Britain & Northern Ireland Week in November, to encourage all corners of the country to play their part in tackling climate change.”

Clara Goldsmith, Campaigns Director at The Climate Coalition, added: “We know that climate change is already having immense impacts, both in the UK and elsewhere in the world, as we see an increase in extreme weather events – from the 2018 heatwaves to wildfires in the Arctic Circle, increased flooding and rising sea levels. It is also having an impact on many things that might surprise us, like mental health, allergies or tea as climate change permeates so many aspects of our lives.

“It’s vital that we end our contribution to climate change as soon as possible to avoid the worst of these effects – that’s why the government’s announcement to set a legally binding target to reach net zero emissions by 2050 was widely welcomed.”

Green GB Week – designed to highlight the opportunities clean growth offers the UK and raise understanding of how businesses and the public can contribute to tackling climate change – is running from 4th to 8th November this year.