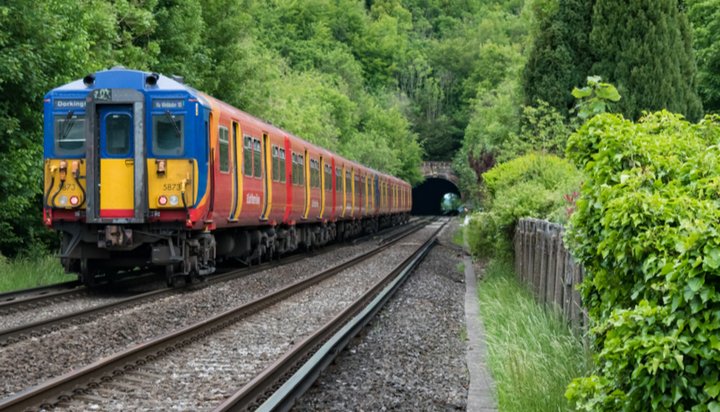 South Western Railway (SWR) is due to host a pilot project to find a way to channel power directly from solar panels into the rail network.

This would allow onsite renewable electricity to provide traction current, without first distributing it to the grid.

Beginning in August, the Riding Sunbeams project aims to develop ‘feeder systems’ that will carry power from grid supply points to the substations which supply power to the third-rail.

Developed in partnership with climate change charity 10:10, Community Energy South and Network Rail, alongside a wider consortium of specialist engineering and renewable energy consultants, it is expected to pave the way towards reduced carbon emissions and lower running costs.

The project will install 135 solar panels on derelict land near Aldershot station in Surrey, initially to supply power to lights and signalling equipment – the results from this test will then inform the creation of systems which can directly supply solar power to the railway.

The project, which is funded by Innovate UK and the Department for Transport, hopes to eventually provide a new way to finance unsubsidised solar in Britain and circumvent grid capacity constraints, while cutting the cost and carbon intensity of energy.

SWR’s Head of Sustainability, Ms Amelia Woodley, said: “The rail industry plays an important role in reducing carbon emissions. SWR has reduced its emissions by 33% over the last 12 months and is continuing to install renewables, and other technologies, to cut our carbon emissions by 60% overall within the next five years.

“With the recent passing of net zero emissions legislation in Britain, there’s never been a better time to partner with the Riding Sunbeams to change the way the rail industry responds to this global challenge.”